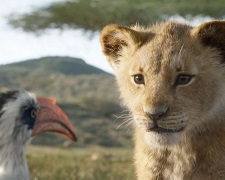 There are great works of literature that have been adapted many times for the stage and screen.  It’s the role of the cast and crew, with particular emphasis on the director, to put their own unique spin on the material and create something that feels fresh and authentic.  As an example, I’d seen previous adaptations of William Shakespeare’s Romeo and Juliet but was still blown away by Baz Luhrmann’s stunning adaptation in 1996.  I knew exactly how the story would unfold but was still amazed by the visuals and its strong emotive impact.

The Lion King follows in the footsteps of Beauty and the Beast, Dumbo and Aladdin in that Walt Disney Studios is taking its much loved animated classics and remaking them using live-action techniques.  It’s probably not correct for me to use the term “live-action” in this case since there isn’t a single human character.  The African settings are real and have been shot by Oscar nominated cinematographer Caleb Deschanel (Never Look Away) but all the animals are computer generated.

Few would deny that the original 1994 version of The Lion King was a great movie.  It was the highest grossing film of that year, it won two Academy Awards, and it enthralled younger audiences across the globe.  It was the story of a young lion cub who, following the death of his powerful father, must harness the courage to stand up to his villainous uncle and take control of the Pride Lands of Africa.  It offers valuable lessons about family, compassion, loyalty and the “circle of life”.

The problem with this 2019 version is that whilst the visual effects team have created cute, life-like animals, the film lacks heart and passion.  It’s as if we’re watching the same movie from 1994 and the filmmakers have been too scared to make any huge creative choices.  The musical themes from Hans Zimmer are the similar, the songs are unchanged, the dialogue is similar and the characters feel stale.  It begs the question – what does this film have to offer (aside from financial profit) that wasn’t already included in the original 25 years ago?

Given a noticeable lack of emotion, the film tries to redeem itself with the laughs provided by Seth Rogen (Pineapple Express) as the loveable warthog and Billy Eichner (Parks and Recreation) as the cheeky meerkat.  They’re easily the best two characters.  The remaining cast is extensive, including 88-year-old James Earl Jones who reprises his role from the original, but they struggle to create anything special or memorable.

The film is likely to be admired by a new generation of young kids but when looking at this through a critical eye, the 1994 movie did it much better.