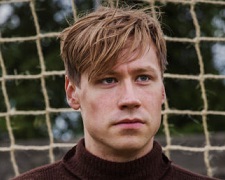 Given the scarcity of sporting movies, it’s humorous to find two being released on the same day here in Australia.  They’re even about the same sport!  As the better of the two, Diego Maradona is a terrific, narration-free documentary that uses grainy video tapes from the 1980s to explore the life of the infamous football star.  Once you’ve seen that, you can turn your attention to The Keeper, a biopic about German footballer Bert Trautmann who rose to fame in Britain the 1950s.

This is an extremely corny movie but it’s still an interesting one.  When we first meet Trautmann (Kross), he’s a German soldier who has been captured by British forces and placed in a prisoner-of-war camp in Lancashire as World War II comes to a close.  There’s not a lot to do inside the camp and so Trautmann and his fellow soldiers kick a football around on the dusty ground.  He’s got a great eye and so he serves as the keeper in front of the makeshift goals.

It’s here where he’s discovered by Jack (Henshaw), an English tradesman who also serves as manager for a struggling local football club.  Jack makes a goofy bet with a customer that his team will win this weekend and desperate to be proven right, he dumps his goalkeeper (who wasn’t very good anyway) and replaces him with Trautmann.  The fact he’s German doesn’t go down well with the crowds but once the team notches a win, their misgivings start to dissipate.

It’s from this point that the film largely plays out as you may expect.  It’s a story about multiculturalism and forgiveness.  It’s understandable that some British fans and players are less accepting of Trautmann given the side he fought on during World War II and the emotional scars still carried by British people who lost friends and loved ones.  However, Trautmann is slowly able to mend the cultural differences between their respective countries because of his prowess on the football pitch.  As we saw in Diego Maradona, it again highlights the power of sport.

This may be a true story but the structure of the screenplay makes it feel like a cheesy rom-com at times.  Trautmann falls in love with an English girl, Margaret (Mavor), who already has a quasi-boyfriend.  There’s a laughable scene where the drunken boyfriend tries to prove himself by challenging Trautmann to a quick-fire penalty shootout.  These hackneyed moments detract from the film’s authenticity.  I’d also argue that the soccer scenes themselves aren’t particularly convincing.  It’s as if the opposition players are hardly trying.

Despite the film’s shortcomings, this is still a worthy drama with an intriguing final act (which I haven’t spoiled).  Trautmann’s legacy in the world of English football should be honoured and remembered.