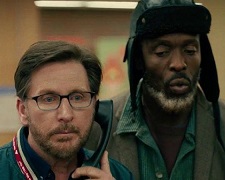 In search of an idea to make his next movie, writer-director Emilio Estevez was inspired by a 2007 article in The Los Angeles Times penned by Chip Ward, the Assistant Director of the Salt Lake City Public Library.  Ward spoke of how libraries had become “de facto daytime shelters” for many of the city’s homeless.  Shelters kicked them out early in the morning and with nowhere to go during daylight hours, particularly during times of bad weather, they sought refuge in public libraries where they could sit, read and make conversation.

Estevez’s film features fictional characters and has changed the setting to Cincinnati but the early scenes illustrate both the plight and ingenuity of the homeless.  It’s the middle of winter, it’s freezing (temperatures are sub zero) and there are dozens of people queuing up outside the public library.  When the doors finally open, the homeless folk make their way to the bathrooms where they can shave, brush their teeth and freshen up.  Everyone knows everyone (including the staff) since the same events play out day after day.

The crux of the narrative in The Public centres on a particularly cold evening when a group of roughly 30 homeless people refuse to leave at closing time.  They’re not trying to be difficult or trying to make a political statement.  It’s simply a matter of necessity.  All the nearby shelters are full and so if forced to sleep outside, they run the risk of hypothermia or serious illness.

We watch events unfold from several perspectives.  The library’s head (Wright) calls in the security guards when the homeless refuse to leave.  An empathetic librarian (Estevez) helps the homeless by barricading the front doors.  A crisis negotiator for the local police department (Baldwin) tries to defuse the situation.  A self-centred district attorney running for mayor (Slater) sees this as opportunity to generate publicity.  A news reporter (Union) puts her own spin on events in pursuit of TV ratings.

Estevez has taken a risk in including so many subplots but to his credit, he’s found a way to weave it all together and create a tense, compelling narrative.  A few characters lack depth (such as Christian Slater’s one-eyed mayor) but for the most part, these are interesting people.  You’ll be curious to see how events unfold but more broadly, it gets you thinking about the world in general, the value of libraries, and the increasing number of displaced people in society.  The sequences where the homeless talk amongst themselves are particularly meaningful.

Leaving you with something to think about as you leave the cinema, The Public is both entertaining and informative.