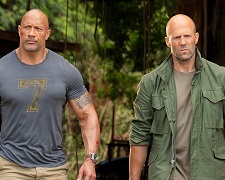 It’s been more than 18 years since The Fast and The Furious was released in cinemas and it’s likely that this super successful franchise will be running for at least another 18 years.  The eight movies in the series to date have grossed a combined $5.1 billion USD at the worldwide box-office.  The characters are getting older but the screenwriters keep coming up with new plots that revolve around two key themes – cars and crime.

Hobbs & Shaw marks a slight divergence in that it’s not a direct sequel.  The full cast will return for Fast & Furious 9 in May 2020 but to satisfy audiences in the interim, this spin-off has been created which focuses on two specific players – Luke Hobbs (Johnson) and Deckard Shaw (Statham).  If you’re familiar with the franchise, you’ll know that these two have a different approach to life and don’t see eye-to-eye.  One is an American federal agent who gets up of a morning and hits the gym.  The other is a former British Special Forces officer who gets up of a morning and has a beer.

You can see where this heading.  Hobbs and Shaw want nothing to do with each other but after exchanging a series of savage insults, they’re forced to team up for a “save the world” kind of assignment.  Some dodgy folk have engineered a deadly virus that can liquify human organs and will eradicate all humans on earth.  The only people that will survive are those with special implants that describe themselves as the “future of mankind”.

A running theme throughout the previous movies is that of “family”.  The storylines were often far-fetched (a car chase on an airport runway springs to mind) but the characters were likeable and you could appreciate why they’d put their lives on the line.  The problem Hobbs & Shaw is that it’s all become cartoonish.  There’s almost no tension as our two “heroes” seem more interested in delivering comedic one-liners than helping friends in perilous situations.

Straying a long way from the franchise’s initial roots, writers Chris Morgan and Drew Pearce push the film into the science-fiction genre with the creation of Brixton Lore (Elba), the keynote villain.  He was once an MI6 field agent but has now been transformed into a genetically modified, Terminator-style cyborg.  He’s looking to get his hands on the virus for a bit of “genocide, schmenocide” but that’s unlikely to occur given the number of times he lets Hobbs and Shaw slip through his fingers.  Lore’s incompetence is designed to prolong the narrative (and I’m ok with that) but it’s too silly and obvious.  I had to laugh when he goofily smashes his helmet in frustration after a lengthy motorcycle chase.

Despite its many limitations, Hobbs & Shaw is still essential viewing for fans of the series as it sets up several plotlines that will likely be covered in next year’s Fast & Furious 9.  Hopefully it has more to offer