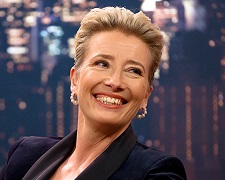 Katherine Newbury (Thompson) has been a pioneer in the world of late night television.  In a ruthless, ratings-driven industry dominated by male hosts, Newbury has smashed the glass ceiling and has now been on air for more than 28 years.  She’s a smart, old-school woman who detests social media and looks for intelligent, insightful guests to appear on her show.

Unfortunately, this year will be Katherine’s last.  That’s not her decision but rather that of network president Caroline Morton (Ryan) who has pulled the plug after a steady decline in the show’s popularity over the past decade.  Change is inevitable and Morton is looking to find a new host to help pitch the show to a fresh, young crowd.

It’s hard to feel too much sympathy for Newbury as she’s often her own worst enemy.  The character is reminiscent of the unforgettable Miranda Priestly (brilliantly played by Meryl Streep) in The Devil Wears Prada.  Yes, she’s successful but she treats her hard-working employees with distain.  There’s a scene where she meets with her writing team and gives them each a number because she isn’t interested in learning their names.

A catalyst is required to create change and it arrives in the form an inexperienced writer named Molly Patel (Kaling).  Molly quickly realises she’s not respected by others involved with the show.  She’s a “diversity hire” who has only been employed because the entire writing team is white and male.  It’s yet another reason to dislike the self-absorbed, out-of-touch Katherine.

Molly could easily quit (no one would blame her) but she’s intent on proving her worth and silencing the many naysayers.  She slowly wins over her fellow writers, her ideas become part of the show, and she becomes quasi-friends with an increasingly fragile Katherine.  That said, will it be enough to lift the ratings and save their jobs?

It’s too much of a Cinderella-story in places but for the most part, this is still an entertaining, feel-good comedy-drama.  In writing the screenplay, Mindy Kaling wasn’t afraid to draw on her own experiences in the industry.  She was embarrassed at the time but now freely admits that she too was a “diversity hire” when he was given her first writing gig on The Office (the US version) in 2005.  She was the only woman and only person of colour on the writing team (plus NBC didn’t have to pay anything extra because she was already an actor on the show).

The actions of Katherine Newbury will polarise audiences.  Is she a kind, warm-hearted individual who puts up a tough exterior to protect herself in a challenging workplace?  Or is she a cold, self-absorbed, mean-spirited person who abuses her power and refuses to listen to alternate views?  There were a few personality shifts I struggled with but Oscar-winning actress Emma Thompson still wins points for creating such a thought-provoking character.