Review: Once Upon a Time in Hollywood 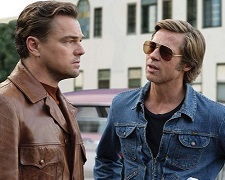 So far in 2019, a total of 19 films have earned more than $100 million USD at the box-office in the United States.  That in itself is not surprising.  The interesting/depressing fact is that of those 19, just two are not part on an existing series and are not a sequel, reboot, remake or spin-off.  The movies in question are Jordan Peele’s Us and Quentin Tarantino’s Once Upon a Time in Hollywood.  By way of comparison, 17 of the 21 films that crossed the $100 million USD threshold in 1999 were original.

This tale of box-office takings highlights the changing nature of cinema across the globe.  Theatres are where you go to see big budget action films like Avengers: Endgame and heavily marketed family flicks like The Lion King.  If you’re looking for romance, comedy or drama and it’s outside of Oscar season, you’re more likely to find it in the comfort of your own home on a streaming service.  That could be good or bad news (depending on how you like to consume your movies) but the point to emphasise is that it’s not just a quick, passing trend.  It’s the new reality.

Once Upon a Time in Hollywood will succeed because of the man behind the camera, Quentin Tarantino.  He’s one of the most well-known directors in the industry and this marks his 9th feature film (provided we count the two-part Kill Bill as a single creation).  Social media has recently been awash with critics and cinephiles weighing in on Tarantino’s work and ranking his movies in order of preference.  Few directors command such a presence and for the record, my favourite is 1998’s Jackie Brown (with Pulp Fiction a close second).

Set in Los Angeles 1969, Once Upon a Time in Hollywood boasts a very large ensemble (keep your eyes peeled for cameos) but largely revolves around three characters.  Rick Dalton (DiCaprio) is a successful actor who fears he’s become a “has been”.  Having built a reputation playing bad guys in movies and television shows, he worries that he’s been typecast and that it’s too late to shift gears.

When it comes to Rick’s career, no one has more at stake than his best friend, Cliff Booth (Pitt).  Cliff was originally employed as Rick’s stunt double but as the roles have dried up, Cliff has become more of a chaperone, house-sitter and personal assistant.  His stress-free, chilled nature also makes him the perfect source of emotional support when required.

While those two characters are fictional, the third depicts a real-life person.  Sharon Tate (Robbie) is a 26-year-old actress starting to make a name for herself within in industry.  She recently married filmmaker Roman Polanski and her connection to Rick and Cliff is that she’s their next-door neighbour in a luxury home bordering Beverly Hills.

There’s likely to be varying opinions about Once Upon a Time in Hollywood but in my eyes, it’s tiring and it lacks a compelling narrative.  Quentin Tarantino has spared no expense in recreating the splendour of 1960s Los Angeles but there are lengthy sequences where the film is more interested in the setting than the characters.  I grew tired of the film references, the radio advertisements and the TV show extracts.

The balance between the respective storylines also feels askew.  We spend an inordinate amount of time delving into Rick’s self-doubting nature and search for affirmation (whether he be talking to Cliff, a producer, or a young girl).  On the flip side, we hardly get to know Sharon Tate except for the fact she likes to slip into a public movie theatre and see herself on screen.

There are both positives and negatives in terms of the finale (without giving anything away) and while I can respect Tarantino’s efforts to create something different and thought-provoking, Once Upon a Time in Hollywood is an unexpected disappointment.