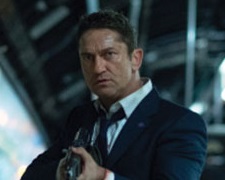 The fact these two films have been made makes the premise for Angel Has Fallen impossible to believe.  President Allan Trumbull (Freeman) is attacked by a series of fast-moving, exploding drones while out fishing on a secluded lake.  All the Secret Service Agents in attendance are killed, the President winds up in a coma in hospital, and the only person to escape relatively unscathed is Mike Banning.

As bizarre as it sounds, Banning has been identified by the FBI as the lead suspect in the attack.  We, as the audience, know that some mysterious group of guys has framed Banning.  This is where logic is thrown out the window.  Why would a man who has risked his life twice to save the President suddenly have an urge to kill him?  The film tries to put forward some silly financial incentive but when you break it down, it doesn’t make sense.  The fact that no one within the FBI can see this is a set-up is alarming.

Anyway, the remainder of the film is spent watching Banning traverse across the countryside, evading capture, and trying to clear his name.  It’s your stereotypical “one guy versus the world” kind of storyline.  The only highlight is a cameo from Nick Nolte (Warrior) who slips into the narrative as Banning’s estranged father.  There’s a humorous sequence where father and son (well, mainly the father) use explosives on a bunch of moronic henchmen.

The true masterminds behind the mayhem are ultimately revealed.  You won’t be surprised by their identity but you may be surprised by the stupidity of their motivations.  Without giving too much away, there were simpler ways to achieve the same outcome without having to come up with an expensive, complex plan to assassinate the President.  You could watch an episode of Scooby Doo and find more interesting villains with better crafted plans.

Angel Has Fallen is a forgettable action piece.