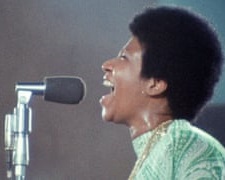 In a career spanning seven decades, Aretha Franklin sold more than 75 million records and won 18 Grammy Awards.  She became the first female to be inducted into the Rock and Roll Hall of Fame in 1987 and she was awarded the Presidential Medal of Freedom by George W. Bush in 2005.  The legacy left by “The Queen of Soul” will be felt for many, many years to come.

Of all her iconic albums, the one which sold the most copies was the 14-track Amazing Grace.  It was recorded in the New Temple Missionary Baptist Church in Los Angeles across two nights in January 1972 with the help of Reverend James Cleveland and his Southern California Community Choir.  It remains the highest-selling live gospel music album of all time.

No one would have known how big the album would become but remarkably, Academy Award winning director Sydney Pollack (Out of Africa) had been engaged by Warner Bros. to film Franklin’s performance and release it in cinemas at the same time as the album.  He shot roughly 20 hours of footage using 16 mm cameras.  Unfortunately, it was never released because Pollack’s inexperienced crew couldn’t sync the audio with the video.  They even hired a lip reader but he gave up after two months because it was too hard!

The reels remained in boxes for 35 years until 2007 when composer/producer Alan Elliott approached Pollack, mortgaged his Los Angeles home and purchased the footage from Warner Bros.  Elliott then worked with renowned video and audio engineer Serge Perron who, with access to new technology, was able to perform a successful sync.  Editor Jeff Buchanan (Her) wove the footage together and the film was complete in 2011.

That’s when the next hurdle arose.  Franklin, upset that she wouldn’t benefit financially from the movie, sued to prevent its public release.  Elliott believed all had been cleared by 2015 (after they’d found Franklin’s original contract from 1968) but just three hours before its sold-out, world premiere at Colorado’s Telluride Film Festival, Franklin was able to get an injunction from a federal judge to block the screening.

It’s sad to be saying this but the reason the film is now finally being seen is because of Franklin’s death in August 2018.  Elliott forged a working relationship with Franklin’s niece, Sabrina Owens, and after showing the film to her extended family, they negotiated a financial deal that would allow for its worldwide release.  Sydney Pollack died of cancer in 2008 but as he orchestrated the footage back in 1972, he is credited as the film’s official director.

There’s nothing particularly special about the way the documentary has been shot (the cinematography is all over the place) but it still holds a powerful allure given the magnitude of the moment.  We’ve seen fictional re-enactments that take us inside an artist’s creative process (most recently Rocketman and Bohemian Rhapsody) but with Amazing Grace, we’re watching the actual moment where a renowned singer creates her most famous work.  The perspiration pouring down her face highlights the intense energy being expended.

The music is stunning but so too are the reactions from those lucky enough to be in the audience.  Some are smiling and cheering and dancing.  Others are sitting back with their eyes closed and letting it all soak in.  It was clearly an emotional experience for the small group of attendees (including Mick Jagger) who were there in January 1972 and while it’s been a long wait, it’s great that it can now be shared with the world at large.