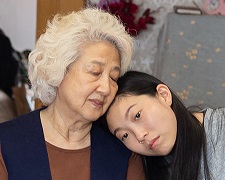 As we’re told in the opening titles, The Farewell is “based on an actual lie.”  Writer-director Lulu Wang was born in China but immigrated to the United States with her family following the Tiananmen Square protests in 1989.  She was just 6 years old at the time.  It was in 2013 that she received word that her grandmother, still living in China, had been diagnosed with stage 4 lung cancer and had just a few months to live.  Wang and her parents then made a quick, emotional trip to Changchun (in north east China) to see their beloved matriarch one last time before she passed away.

Here’s the catch – no one had told “Nai Nai” (a Mandarin term for grandmother) that she was dying.  The family thought it best to protect her from the inevitable anxiety so that she could enjoy her final days.  As it would look suspicious if all of Nai Nai’s extended family descended on her home for an unexpected visit, a cousin’s wedding was brought forward and used as the excuse for everyone to get together.

Wang penned a screenplay about her experience but struggled to find a studio who was interested in making it her way.  Some wanted to turn it from a drama in a comedy.  Others wanted to Hollywood-ise it by adding Caucasian characters and a romantic interest.  It wasn’t until Wang told the story on the popular radio program This American Life in 2016 that the project took flight.  Producer Chris Weitz (About a Boy) heard the show, met with Wang and helped secure the finance.  The finished product earned rave reviews at the 2019 Sundance Film Festival with A24 buying the rights (after a fierce bidding war) to distribute the film in cinemas across the globe.

The Farewell is beautifully told.  When it hits you, it hits you.  There’s a particularly poignant scene where Nai Nai tells Billi (the character based on Lulu Wang) that when it’s her turn to get married, she’ll throw an even bigger banquet than that provided to her cousin.  It’s a tough moment for Billi knowing that she must smile and keep up the charade despite knowing that her grandmother will never live long enough to see that day.

While it’s an extremely personable story, the film also has something broader to say about the world and its cultural differences.  Billi has long struggled with her identity given she’s of Chinese heritage but was raised almost entirely in America.  Given the significant differences between the two countries, she’s unsure about her core “beliefs” and where she belongs.  The fact she’s struggling to find meaningful employment only adds to her insecurities.  It’s a breakout performance for Awkwafina (Ocean’s 8, Crazy Rich Asians) who relies more on body language than dialogue in bringing credibility to the role.

With lots of nice flourishes (such as the occupants of an adjoining hotel room) and some memorable characters (it’s hard to go past Nai Nai’s open, unfiltered nature), The Farewell celebrates diversity whilst recognising the emotional similarities that connect us.