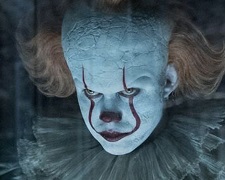 I’ll admit to being surprised by the success of It when released in September 2017.  Made on a relatively small budget of $35 million and featuring no A-list actors, it pulled in more than $700 million USD at the worldwide box-office (ranking it 13th for the year).  Here in Australia, it topped the charts for two consecutive weekends.

While I realise I’m in the minority, I wasn’t a huge fan given the rushed narrative, sluggish character development and so-so performances.  It seems as if New Line Cinema and Warner Bros. Pictures have heeded my advice for this second instalment by slowing the pace and increasing the running time.  It Chapter Two clocks in at a lengthy 2 hours and 50 minutes – the 2nd longest studio release in Australia this year behind Avengers: Endgame.  You’ll need water and snacks!

The film picks things up 27 years after the original ended.  Bill, Beverly, Ben, Richie, Eddie and Stanley have all grown up, left the small town of Derry, and achieved varying levels of professional success.  The only member of the self-described “Losers’ Club” who still resides in Derry is Mike.  When a few children in town go missing, Mike gets on the phone to his childhood friends and instigates a reunion.  He wants to follow through on the pact they made as youngsters – if It ever appeared again, they’d return to Derry to finish him off once and for all.

Based on the promotion and advertising, it’s easy to think this is a simple horror flick.  Instead of having a scary doll or a scary demon, we have a scary clown.  Those that have read Stephen King’s epic 1,138 page novel will know it’s about much more than that.  It Chapter Two has its fair share of formulaic thrills but it digs deeper and has something to say about friendship, bullying, trauma and perhaps most importantly, the complex transition from childhood to adulthood.

Writer Gary Dauberman (Annabelle) and director Andy Muschietti (Mama) do a better job handling the material this time around.  There are potent sequences (like when they go off and find “tokens”) that help provide insight into the characters’ scarred psyches.  These scenes are both creepy and informative.  That said, it’s hard not be frustrated watching everyone talk endlessly while continually skirting around the issues that trouble them.

I wasn’t wowed by the big finale but with a stronger cast and some well-choreographed set pieces, It Chapter Two improves on its predecessor.