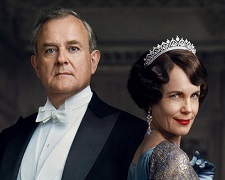 What do Star Trek, Mission: Impossible, Sex and the City and South Park all have in common?  They’re part of a fast growing list of successful television programs that have brought to the big screen in movie form.  The latest addition is Downton Abbey, a 52-episode show that followed a group of rich folks and their servants at a fictitious Yorkshire country estate in the early 20th century.  It aired between 2010 and 2015 and took home an Emmy in its first season for best miniseries.

As someone who hasn’t seen a single episode, I’m perhaps not the best person to be reviewing this film.  It’s obviously targeted at fans of the show but for those new to the material, I’m proof that you can still be entertained.  Newbies will struggle to appreciate the intricate relationships between the many characters (it’s tough enough to remember all their names) but the dialogue is sharp and the narrative relatively simple.

I should have expected the film’s charm and wit given the person behind it, Julian Fellowes.  The British writer won the best original screenplay Oscar in 2002 for the brilliant genre-twisting Gosford Park (a rare A+ from me).  Downton Abbey was conceived as a spin-off of Gosford Park but eventually became a stand-alone project.  With credits including Vanity Fair, The Young Victoria and The Chaperone, it’s clear that Fellowes loves to shine the spotlight on class society in historical periods (with a particular focus on Great Britain).

Set in 1927, this two hour movie is structured around a particular event.  King George V and Queen Mary are going on a short tour through northern England and as part of their travels, they will be spending roughly 24 hours at Downton Abbey.  It’s a huge honour for the Crawleys, the wealthy family who reside at the stunning residence, but it’s also very exciting for the servants who will get a one-in-a-life opportunity to cook, clean and serve for their beloved monarchs.

There’s no shortage of storylines to follow and it’s impossible to list them all in this short review.  Some subplot are rushed and don’t get the attention they deserve (such as that of a butler who visits an illegal establishment) but on the whole, Fellowes has done an admirable job of balancing them all up.  These are interesting characters and you’ll quickly invest in their fate.

The cast is superb and it’s no surprise to see 84-year-old Maggie Smith as the standout in a role that won her three Emmy Awards.  As the take-no-nonsense Violet Crawley, she’s an “expert in every matter” and has the perfect insult for every situation.  Smith gets the best of the one-liners but there’s still plenty left to share around amongst the likes of Kevin Doyle as a nervous footman and Joanne Froggatt as an astute housemaid.