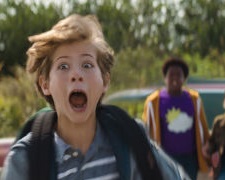 It’s a premise we’ve seen before.  A group of “nerdy” school kids try to ditch their naivety and find love and/or popularity amongst their fellow classmates.  Great examples that come to mind include She’s All That, Mean Girls, 10 Things I Hate About You, Easy A, American Pie, Superbad and Booksmart.  These films provide humour while also emphasising the worthy message of “to thine own self be true”.

Good Boys puts a slightly different spin on the genre by focusing on three boys who are younger than the norm.  Max (Tremblay), Lucas (Williams) and Thor (Noon) are 12-year-old kids on cusp of adolescence and who have a lot of thoughts running through their head.  As Max succinct says at the start of a new school year – “we’re in the 6th grade and I want to start doing 6th grade things.”

What Max is largely talking about is girls.  He has his eyes on the shy Brixlee (Davis) but he’s completely inept when it comes to romance and seduction (as you might expect).  When invited to a “kissing party” thrown by a popular classmate, Max sees it as an opportunity to finally interact with Brixlee and, if all goes to plan, land his first kiss.

What follows is a series of misadventures as these three kids, who go by the name of the “Beanbag Boys”, prepare for party.  They start out by using the internet to learn how to kiss a girl but by film’s end, it’s morphed into a very different journey involving drugs, alcohol, sex toys, weapons, cops and a funny/creepy guy played by Stephen Merchant.  Suffice to say Max, Lucas and Thor now have a changed view of the world and their friendship.

The storyline doesn’t flow as smoothly as it should.  There are times when it feels like a bunch of unrelated skits.  One example is an odd sequence where they harness the courage to run across an 8-lane freeway with peak hour traffic.  Some might get a laugh out of it (not me) but it doesn’t seem to have much of a connection to the broader story nor does it add anything in terms of character development.

Qualms aside, Good Boys is still a winner in terms of laughs and entertainment.  Writers Gene Stupnitsky and Lee Eisenberg (largely known for their writing work on the US version of The Office) have created three cute, foul-mouthed characters that will win audiences over.  It’s hard not to be amused as they misinterpret words (e.g. nymphomaniac) and try to act older than they are.  Lucas wins bonus points because of his compulsion to tell the truth at the worst possible time.

Finishing on a strong note with a hilarious musical number, Good Boys is good stuff.