Review: Dora and the Lost City of Gold 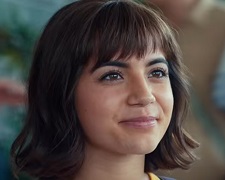 If you’ve had young children at some point over the past two decades, you’re likely to be familiar with Dora the Explorer.  She’s the central figure in an animated TV show, produced by Nickelodeon, which premiered in 2000 and featured 178 episodes.  The 7-year-old solves puzzles, overcomes obstacles, and interacts with a monkey and a talking backpack (no, she’s not on drugs).

Taking Dora’s simplistic story and turning it into a live-action movie would have been a tricky assignment but the creators have taken a few chances and been rewarded for their efforts.  We’ve seen this before from director James Bobin (Flight of the Concords) and co-writer Nicholas Stoller who successfully reinvigorated an old franchise with The Muppets (2011) and Muppets Most Wanted (2014).

The gutsiest decision has been to go with an older version of the much-loved character.  There’s a quick-fire introduction to the younger Dora but for the most part, the one we see in the movie is a 16-year-old played by Isabela Moner (Sicario: Day of the Soldado).  She was born and raised in the Peruvian jungle with her two wise parents (played Michael Peña and Eva Longoria) providing a broad education.

The writing team have fun with the character in the opening act.  Dora’s parents are going on a lengthy exploration to find a hidden Inca city and rather than take their daughter with them, they’ve arranged for her to spend time with her cousin in Los Angeles.  Instead of living in the wild with a talking backpack (just thought I’d mention it again), Dora will have to interact with people, develop social skills, and adjust to life in a formal school.  She’s a “fish out of water” and her talkative, outgoing nature sets the stage for several humorous scenes.

The remainder of the film sees Dora and her newfound school friends return to Peru to locate her parents who have gone missing.  They’re pursued by a team of hapless villains who are hoping they’ll be led to the lost City of Gold where they’ll find fame and immense fortune.  It’s reminiscent of adventure franchises like Indiana Jones and National Treasure as our heroes decipher clues in pursuit of the end goal.

Dora and the Lost City of Gold has had added publicity here in Australia given it was a Hollywood production shot largely in South East Queensland in late 2018.  The locations used include Tamborine Mountain, The Old Museum, Brisbane Airport and the Palm Beach Currumbin State High School.  The film will also lift the profile of young Australian actors Madeleine Madden and Nicholas Coombe who have been cast as Dora’s friends.

The film never takes itself too seriously which is part of the reason it will entertain younger audiences.  Isabela Moner also deserves praise for her lead performance.  The Dora we’ve seen in the TV show is fairly one-dimensional but Moner adds a great deal more to the character.  In finding the right balance of intelligence, goofiness and energy, she’s created someone who is both funny and credible.  The role could easily have been overplayed (but thankfully it’s not).

Whether this becomes part of a longer running series will depend on box-office.  I’m not sure if a sequel would boast the same level of creativity but if they can keep this cast and crew intact, I’m happy for them to give it a go.