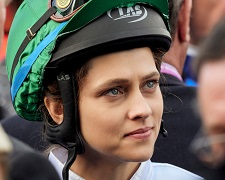 As part of my research for Ride Like a Girl, I re-watched footage of the 2015 Melbourne Cup where jockey Michelle Payne became the first female to win the race in its 155 year history (wish I had of backed her given the long odds).  It reminds me that the greatest joys in life often come from doing something that no one thinks you can!  I knew exactly how the race would end but my eyes were still moist listening to Michelle speak about the magnitude of the moment in a post-race interview (less than 2 minutes after she crossed the finish line).

It’s the type of uplifting, feel-good story that lends itself well to cinema and the timing of the event was perfect.  Less than 5 weeks after Payne’s win, Screen Australia announced a “Gender Matters” funding program to help address the lack of female producers, writers and directors within Australia’s film industry.  A few months later, Ride Like a Girl was announced as one of the funding recipients and it would boast a female director, co-writer, editor, production designer and costume designer.

If there’s one reason to see this film, it’s to enjoy a classic underdog tale.  As we learn throughout the movie, Michelle (Palmer) was the youngest of 10 children.  It’s not hard to imagine the fights and sibling rivalries that would have evolved all living under one roof.  He mother passed away when she was just 6 months old and so it was her horse trainer father, Paddy (Neill), who raised Michelle and helped infuse her love for the sport.

Marking the directorial debut of Australian actor Rachel Griffiths, Ride Like a Girl is a dramatic re-enactment.  Part of me wishes they’d have gone with a documentary given the cheesy, contrived nature of certain scenes.  You’ve got misogynistic guys continually saying “girls never ride in the Melbourne Cup” and you’ve got the strong-willed Michelle refusing to take “no” for an answer.

I’m not saying that Michelle’s didn’t overcome obstacles and discrimination along the way but these sequences do feel staged.  The better content in the film is the dissection of Michelle’s up-and-down relationship with her tough father.  There’s more nuance in their conversations with Teresa Palmer (Hacksaw Ridge) and Sam Neill (Hunt for the Wilderpeople) deliver convincing performances.

Cinematographer Martin McGrath (Muriel’s Wedding) deserves recognition for his well-selected camera angles during the race sequences.  He gets the smaller stuff right too.  I loved the shot where Michelle returns to the female’s jockey room after winning the Cup and has a quiet moment to herself while the world outside celebrates.

I’m not sure this will be the film which “stops a nation” but if you’re interested in Michelle Payne and her achievements, there’s enough to take away.