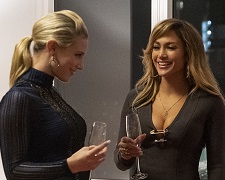 Several years ago, a group of struggling female strippers concocted a plan to get rich.  They would seduce wealthy Wall Street businessmen, take them to clubs and spike their drinks.  When the men became borderline unconscious, the women would take their credit cards and rack up charges as high as $50,000 per night.  The proceeds would be split between the women and club management (who were also in on the action).

Hustlers is an interesting true story but we’re lucky to even know about it at all.  The police became involved in 2013 but it wasn’t until journalist Jessica Pressler published an article in December 2015 that the details became widely known.  Many men (some of them married) were fleeced but they didn’t speak with journalists or investigators because they didn’t want to admit they had been victimised by women.  They were content to suffer the financial loss and never speak of it again.

Written and directed by Lorene Scafaria (Nick & Nora’s Infinite Playlist), Hustlers is a film of two halves.  The opening hour looks at the evolution of the stripper scene in New York City.  It begins in 2007 when top-notch strippers were making more money than brain surgeons.  The good times soon came to an end when the Global Financial Crisis hit the hip pockets of stockbrokers and finance guys.  The money dried up which forced some strippers to make the shift into prostitution.

The second half delves into the criminal activities of the women as they drugged and stole from unsuspecting men.  It’s at this point where the film treads a very fine line.  Scafaria doesn’t want to make them out as heroes but nor does she want to portray them as villains.  On one hand, the actions of these women are deplorable and it’s lucky that none of their unsuspecting victims were killed of an accidental overdose.  On the other hand, these women deserve credit for their ingenuity and the way they have “evened the score” against dodgy/sleazy Wall Street types (although not all in the movie deserved it).

It may sound like a complex tale of criminality but when the end credits start to roll, you’ll realise it’s more a story of friendship.  Romana (Lopez) is the cunning, ambitious veteran who uses her power over men to great effect.  Destiny (Wu) is her trusting protégé who is prepared to relinquish her stronger morals to gain financial independence.  The interaction between these two (along with other key characters) highlights the close bond they all shared.

Hustlers is an appealing drama with strong performances, genuine laughs and a winning soundtrack.  There’s lots to think about too.  It’s easy to look down on strippers but the film confirms they’re often more intelligent and shrewd than their male customers.  There’s a great sequence where Romana explains the best way to spot a wealthy target – look beyond the suit and focus on the shoes, watches and wedding rings.

There are parts to the narrative that don’t add much.  Destiny’s up-and-down marriage is over in a flash and the one-on-one scenes with her grandmother lack depth.  Also, were was all the money going???  The film suggests these women are motivated by factors other than pure greed (e.g. helping raise their kids) but it’s hard to believe given the amounts they’re reeling in and the rate at which they burn through it.  I’m curious to see how much empathy they draw from audiences.

On track to make more than $100 million at the US box-office, Hustlers has lots of people talking – both before and after they see it.