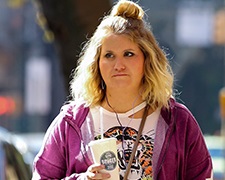 It’s as straight forward as movie titles get.  This is a film about a person named Brittany who runs a marathon.  Her decision is driven by her waistline and her wallet.  Brittany’s doctor suggests she lose 25kgs for the betterment of her long-term health and, too poor to afford a gym membership, she takes up running with the goal of completing the prestigious New York City Marathon.

In that regard, this a feel-good, inspirational flick.  There are plenty of us out there (myself included) who could lose a few kilograms but we lack the motivation to do so.  Star Jillian Bell shed 18kgs herself as part of her preparation for playing the titular character.  It provided insight into the changes required to one’s diet and exercise regime to lose such a substantial amount of weight.

There’s a lot more to this film however.  Yes, it’s about a physical transformation but given just as much prominence is the exploration of Brittany’s prickly, uneven personality.  She’s rude to her newfound running buddies, she disrespects family members, and there’s a shocking sequence where she taunts another woman with weight issues.  She’s a really, really hard person to like.

Writer-director Paul Downs Colaizzo, in what is his debut feature film, gives audiences plenty to digest in scrutinising the troubled Brittany.  She’s lacking in confidence and she’s quick to push people away who offer assistance.  Many of Brittany’s self-inflicted problems can be easily solved but it’s as if she’s addicted to self-pity and a continual “woe is me” attitude.

Jillian Bell is outstanding in the way she captures her character’s fragile nature and also in the way she balances laughs with poignancy.  It’s a darker comedy than some might expect.  Bell has built a steady resume of supporting comedic performances in films such as Office Christmas Party, Fist Fight and Rough Night and this provies she proves she’s more than up to the task when it comes to leading roles.

The film premiered at the Sundance Film Festival back in January where it won the lucrative audience award for the best U.S. feature film.  A bidding war ensued involving the likes of Lionsgate and Netflix but in the end, it was Amazon Studio who were wowed by its “hilariously rich story” and who snapped up the bidding rights for $14 million.  It may lack the star power of other big-screen Hollywood comedies but this is one movie you must see.

You can read my chat with star Jillian Bell by clicking here.