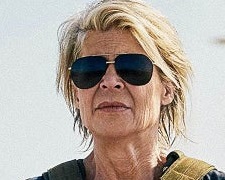 If you think of long running animated series like The Simpsons and Family Guy, you’ll know that for the most part, every episode begins anew with no knowledge of what occurred in previous instalments.  It’s why Bart Simpson is still in the 4th grade despite the show running for more than 30 years!

This same logic is starting to creep into the film world.  Halloween was released in 1978 and was followed by nine sequels (most of them very average) between 1981 and 2009.  When the producers brought back Jamie Lee Curtis and pushed the reset button in 2018, they asked audiences to ignore all the previous movies and pretend this new movie was a direct follow on from the 1978 original.

That’s again the case here.  Director James Cameron wowed audiences a few decades ago with The Terminator (1984) and Terminator 2: Judgement Day (1991).  The later was the highest grossing movie of that year.  After a lengthy pause in the franchise, three more sequels followed in 2003, 2009 and 2015.  They didn’t make enough money and so, once again, it’s time for a reset.  We’re asked to believe those movies occurred in an “alternative timeline” with Terminator: Dark Fate picking up the storyline not longer after the events of Terminator 2: Judgement Day.

You can see that Dark Fate isn’t offering a lot of creativity in terms of plot.  It’s sticking with the same themes and formulas that worked effectively in the earlier movies.  James Cameron helped write the script but the directorial duties this time have been taken on by 49-year-old American Tim Miller who rose to prominence in 2016 with Deadpool.

The standout ingredient in this film is the return of Linda Hamilton.  She hasn’t starred in a major studio flick for over 20 years and having fled Hollywood for a simpler, better life in New Orleans, Hamilton was coaxed out of semi-retirement to step into the shoes of Sarah Connor one more time.  She’s so good here.  She full of grumpy one-liners in portraying the 60-something-year-old Sarah as angry, gritty and crusty.  Her character has an important role in protecting the confused Dani.

You’ll see Arnold Schwarzenegger again (how could you not make a Terminator film without him?) but he’s playing second fiddle to Hamilton and 32-year-old Canadian actress Mackenzie Davis (Blade Runner 2049).  Davis plays an “augmented” human soldier from the future who has followed the villainous terminator back in time with hopes of eliminating him.

In terms of action sequences, Dark Fate has what you’d expect – lengthy punch-ups, slow-mo gun fights and a crazy car chase.  That’s all in the first 30 minutes!  It starts to get a little tiring in the closing act with Miller electing to go with farcical, over-the-top action as opposed to credible, inventive action.  A scene involving a military plane (without giving too much away) is the best example.

I think Terminator: Dark Fate is worth a look but if the broader public disagrees, I’m sure the “reset button” will get another push!