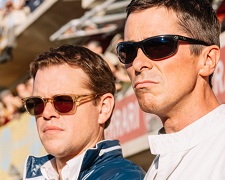 The year is 1963 and a furious Henry Ford (Letts) laments that the Ford Motor Company, founded by his father more than 60 years ago, is experiencing the “worst sales slump in US history”.  There’s a sequence where he berates his staff (both the blue and white collar guys) and demands they come up with new ideas or else they’ll be fired.

His army of executives and vice-presidents believe they’ve got the answer.  The Ford brand has become tired and wealthy customers are now lured by the likes of Jaguars, Aston Martins and Ferraris because they feature in renowned, televised motor races and are associated with “victory”.  Ford buys into their theory and bankrolls a racing program with the end goal of winning the famous 24 Hours of Le Mans in France and demonstrating to the public that Ford cars are the fastest on earth.

Many people had a part to play in achieving Ford’s dream but this film, directed by James Mangold (Walk the Line, Logan), focuses on two key characters.  The first in Carroll Shelby (Damon), an American driver who won at Le Mans several years earlier but subsequently retired due to life-threatening health issues.  The second is Ken Miles (Bale), a penniless British driver who is blessed with talented but struggles to get opportunities on the track due to his “hothead” nature.

Ford demands the best so he can “bury Ferrari 100 feet under the finish line” and so this unlikely duo have been recruited.  Shelby is there for his experience, his business acumen and his star power.  Miles is there for his skill behind the wheel and his knowledge when looking under the bonnet.  Their goal is to design a car that can achieve speeds exceeding 300 km/hr while also being durable enough to withstand 24 hours of consecutive racing, in all weather conditions, on a rough track.

This fascinating true story has been slightly over-romanticised by the 3-man writing team.  There’s a scene where a jetlagged Miles can’t sleep and so he goes for a late night wander to soak in the vibe of a quiet race track (where he runs into Shelby doing the same thing).  There’s another odd moment where Miles’s wife (Balfe) makes a point to her husband by engaging in ridiculously dangerous driving on a windy suburban road.  These parts lack authenticity and feel like they’ve been included solely to add unnecessary comedy/drama to a story that can already stand on its own two feet.

The film’s other weak spot is its one-note villain.  Josh Lucas plays Leo Beebe, a high-ranking executive within the Ford Motor Company with a petty vendetta against Ken Miles.  I’m not sure why he’s such a sabotaging jerk, why no one else can see that, and why Henry Ford decides to put him in charge of the racing program.  He’s a character with zero depth.

Qualms aside, Ford v Ferrari makes for compelling viewing and my attention was held throughout the lengthy 152 minute running time.  The interplay between Matt Damon and Christian Bale is terrific and the racing scenes, shot from every camera angle imaginable, do a great job recreating the tension of the races while also highlighting the dangers faced by the drivers.  These fast-paced action scenes are nicely balanced with a quieter, moving subplot involving Miles’s young son (Jupe) who idolises his father but also worries for his safety.

I was sweating as the final credits started to roll and given that was from the effects of the film (as opposed to eating too much popcorn), I can say Ford v Ferrari achieves its mission in telling a great true story.