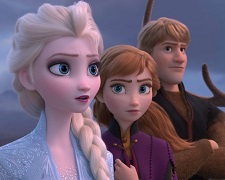 There was no doubt that a sequel would be made.  In 2013, Frozen reeled in $1.3 billion at the global box-office making it the highest-grossing animated film of all time (not adjusted for inflation).  Critics were just as enamoured and the film won Academy Awards for best animated feature and best original song (“Let it Go”).

This time around, the key ingredients are largely unchanged.  Inspired by a research trip through the forests of Scandinavia, writer-directors Chris Buck and Jennifer have returned with a fresh, creative story.  Songwriters Robert Lopez and Kristen Anderson-Lopez are back on board with 7 new songs including the memorable “Into the Unknown”.  Kristen Bell, Idina Menzel, Jonathan Groff and Josh Gad have all reprised their roles as the film’s reluctant heroes.

If your memory is a little hazy as to what took place in the original movie, there’s a humorous sequence at the end of the opening act where the talking snowman, Olaf (Gad), provides a fast-paced summary.  It culminated with the magical Queen Elsa (Menzel) and the brave Princess Anna (Bell) harnessing their collective talents to save their small kingdom from the villainous Hans.  The tale was loosely inspired by Hans Christian Andersen’s fairy tale, The Snow Queen.

The five-person writing team have done well to craft something distinctively different for the sequel.  Not too far from the Kingdom of Arendelle lies an enchanted forest.  Its residents, a mysterious group of people, can summon the elements of air, water, fire and earth as part of their day-to-day existence.  However, the forest has been surrounded by an impenetrable mist for more than 30 years following a battle that “enraged the spirits”.

Queen Elsa had been told this story as a child but it’s only now become relevant because of an odd musical tune that’s ringing in her ears (I was humming it too on leaving the cinema).  Tracking its origins to the enchanted forest, Elsa is able to use her magic powers to break the mist and, working with her fearless crew, goes in search of answers.  As per the advice of a wise troll – “the truth must be found”.

Frozen II is a notch below its predecessor but still has a lot to offer.  Josh Gad wins big laughs as the deep-thinking Olaf, there’s a cute frog that will win audiences’ affections, and, while I can’t believe I’m saying this, there’s a scene stealing performance from a gust of wind (although it might be tough to sell merchandise based on that character!)

The story is great too.  It’s a cool, strange, mystic world where you’re not quite sure what lies beyond each corner.  The character interaction is also terrific with the film delving into the theme of siblings growing up and developing their own sense of independence.  There are some great, often tense, conversations shared between Elsa and Anna that many will relate to.

A research study published in 2016 showed that for Disney animated features involving princesses, male characters produced the majority of the dialogue in almost all cases (the only two exceptions were Tangled and Brave).  The original came up a touch short (59% of the words spoken were from men) but if Frozen and Frozen II are any indication, female-driven adventures are in high demand.