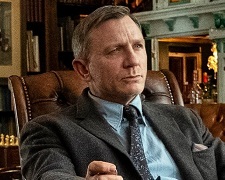 45-year-old writer-director Rian Johnson (Star Wars: The Last Jedi) loved Agatha Christie books growing up and now, thanks to his growing influence in Hollywood, he gets the chance to create a murder-mystery of his own for the big screen.  There’s nothing understated or restrained about the set up.  A character describes the case as being like a game of Cluedo and it’s an apt description given its clichés and farcical nature.

The location is a huge, lakeside mansion adorned with statues, ornaments and paintings.  The victim is a renowned mystery writer (Plummer) who has been found dead at his 85th birthday party.  The suspects are an eclectic group of family members who are all given a plausible motive to within the film’s opening half-hour.  The detective (Craig) is an mysterious individual described as “the last of the gentlemen sleuths”.   The only thing missing is Colonel Mustard and a candlestick!

There’s a catch though.  In a recent interview for Variety magazine, Johnson stated that the “whodunit” element of such movies is often the weakest part and he wanted to take that onus off viewers.  I don’t want to give too much away but you won’t have to wait until the final scenes to see all the pieces of the puzzle fit together.  The film changes tack at several points and becomes more of a quirky, offbeat comedy as opposed to something borrowed from the pages of Agatha Christie or Arthur Conan Doyle.

I’ve read some glowingly positive reviews for Knives Out thus far but my thoughts are mixed.  It boasts a huge ensemble cast but the likes of Jamie Lee Curtis, Michael Shannon and Toni Collette are given next-to-nothing to do.  The opening sequence of interviews are unnecessarily drawn-out and the film is overstaying its welcome at 130 minutes.  I’d preferred something more fast-paced.

The two positives are easy to spot.  Daniel Craig (Casino Royale) gets the best of the dialogue as the humorously named Detective Benoit Blanc.  He keeps everyone guessing (including the audience) throughout the film as to whether he’s incredibly astute and ridiculously goofy.  Ana de Armas will be lesser known to mainstream audiences but her career is on an upward trajectory following her memorable performance as a hologram in Blade Runner 2049.  She too has fun with her role as an anxious nurse with a propensity to vomit when telling a lie.

Rian Johnson deserves credit for giving the whodunit genre a good shake-up and whilst Knives Out wins points for creativity, I didn’t care about these characters as much as I should.