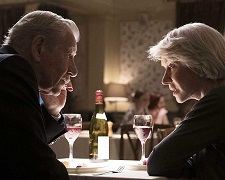 In 1997, Ian McKellen was an accomplished theatre actor who had been performing on stage for more than 30 years.  He’d won five Olivier Awards for his work on London’s West End and, across the Atlantic, he’d earned a Tony Award for his performance as Antonio Salieri in the acclaimed play Amadeus.  While he’d picked up the odd film role here and there, he was keen to transition and make his mark in the world of cinema.

It was at that point when he first crossed paths with American director Bill Condon who had just finished a screenplay chronicling the final days of iconic filmmaker James Whale.  They shared a meeting in Los Angeles and their careers were forever changed.  Gods & Monsters earned Ian McKellan an Academy Award nomination for his stunning lead performance (losing to Life is Beautiful’s Roberto Benigni in an upset) and for Condon, he took home the coveted 13 ½ inch statuette after winning best original screenplay.  Many doors opened in the years that followed.

The pair reunited for 2015’s Mr Holmes (another must-see movie) and now, they’re teaming up for a third time with The Good Liar, adapted from the debut novel of former British intelligence officer Nicholas Searle.  It was inspired by a distant relative of Searle’s who met and befriended an elderly man through an online dating website only to later learn he was full of lies and secrets.

That’s largely how this film begins.  Roy Courtnay (McKellan) is an 80-something-year-old guy who, after exchanging details online, meets the similarly aged Betty McLeish (Mirren) at a nice restaurant.  They make good conversation, go on a few more dates, and it’s not long before the hobbling Roy has moved into Betty’s newly purchased home.  Things are moving far too quickly in the eyes of Betty’s grandson (Tovey) who suspects Roy has ulterior motives.

He’s right.  As the audience, we know Roy is a liar and a crook.  You might think an octogenarian isn’t too concerned about accumulating wealth but that’s not the case here.  Roy, together with his long-time business partner (Carter), concoct elaborate plans and fleece unsuspecting folk of their hard-earned savings.  They love the challenge as much as the money and, given she has more than few dollars in her bank account, Betty makes for the perfect new target.

This should have been a better movie.  It’s an intriguing storyline but the execution is poor.  When characters speak of farcical investment returns and then exchange money between bank accounts, they use giant calculator-type devices that are burdensome to carry around.  It’s such a goofy plot device.  Could they not have used an app on their iPhones?  There’s another sequence where Roy commits a heinous crime on a railway platform and it’s odd that he can get away with it so easily.  There’s just one CCTV camera in the whole area?

Don’t get me started on the ending!  A plethora of new information is revealed and it feels like a rushed, very different movie from the 90 minutes that preceded it.  Ian McKellen and Helen Mirren are two of the best actors to come out of England but they’re not enough to save this muddled, disappointing script.  I can only assume the book was much better.