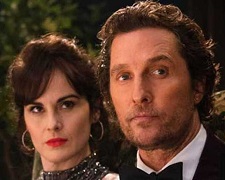 English director Guy Ritchie has made 11 feature films across 20-plus years and my favourite remains his first – Lock, Stock and Two Smoking Barrels.  It was a fun, violent crime flick that involved gangs, heists and some really dumb people (hunt it down if you’ve never seen it).  Having transitioned into safer, bigger Hollywood blockbusters over the last decade (Sherlock Holmes, King Arthur: Legend of the Sword, Aladdin), Ritchie sees The Gentlemen as a “return to my roots” in going back to the genre that launched his career.

Oscar winner Matthew McConaughey (Dallas Buyers Club) steps into the shoes of Mickey Pearson, an Oxford graduate and wealthy entrepreneur who has created one of the largest, if not THE largest, illegal marijuana distribution businesses in the United Kingdom.  The plants are grown in massive underground laboratories hidden away on remote, private estates.  It’s a wonder than no one has tipped off the cops given the number of staff and socialites involved.  I can only assume they’re handsomely remunerated.

Anyway, Mickey believes it’s time to “get out of the game” and there are two interested parties bidding to take over his empire for the right price.  The frontrunner, played by Jeremy Strong (Succession), is a suave, confident gangster who has a knack for getting what he wants.  His competition is an Asian crime syndicate headlined by Henry Golding (Crazy Rich Asians) as a “Chinese James Bond”.  Others with a key role to play include Colin Farrell (In Bruges) as a boxing coach unwillingly dragged into the mayhem and Charlie Hunnam (Sons of Anarchy) as Mickey’s right-hand man.

On the whole, it’s a complex story that requires a little too much explaining from Hugh Grant who features as a private investigator and also the film’s quasi-narrator.  The opening hour is particularly slow as Grant continually rambles and the action/drama is kept to a minimum.  The script is over-written with characters seemingly in a competition to see how many metaphors and analogies they can squeeze into each scene.  I’m not sure I’ve ever seen so much slang in a single movie and while it results in a few memorable one-liners, the novelty wears out quickly.

The screenplay also struggles in balancing up the numerous subplots.  As the only key female in the film, Michelle Dockery (Downton Abbey) gets very little to do as Mickey’s loyal wife.  The same applies for Eddie Marsan (Happy-Go-Lucky) as a boisterous newspaper editor looking for a big story.  It’s a wonder why his story was included at all given its insignificance to the wider narrative.

I do enjoy a quality crime-gangster movie and while The Gentlemen tries to look cool with its flashy cast and debonair dialogue, it struggles to provide a meaningful entertainment until the final half-hour.  Yes, the finale is amusing but the rest is forgettable.