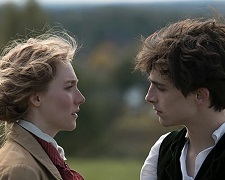 Louisa May Alcott was an unheralded 35-year-old when, on the strong urging of her publisher, she reluctantly wrote the first of a two part book series that would become known as Little Women. Not even Alcott would have believed how popular and beloved her novel would become. It’s taken on Shakespearean traits given the frequency with which it has been adapted for stage and screen.

This latest version is the creation of Oscar nominated writer-director Greta Gerwig (Lady Bird). Gerwig had loved the book growing up but on re-reading it as a 30-year-old, she found fresh themes and was instantly inspired to adapt it in her own unique way. She pitched her idea to Sony producer Amy Pascal, penned a script (a few changes were made from Alcott’s novel) and, following the success of Lady Bird, was given approval to serve as the film’s director.

If you’re new to the tale, Little Women is set in the mid-19th century and is the story of four young ladies on the cusp of adulthood.  Their ambitions are as different as their personalities.  Jo pursues independence, Meg wants a husband, Amy yearns for wealth, and Beth seeks contentment.  The wonderful actresses stepping into their famed shoes are Saoirse Ronan (Brooklyn), Emma Watson (Beauty and the Beast), Florence Pugh (Midsommar) and Australia Eliza Scanlen (who got her start in Home and Away).

The performances are flawless and as a combined ensemble, it’s the equal of anything else seen on screen over the past year.  I love the openness and affection shown by these characters towards each other.  They’re constantly touching and laughing and arguing and talking over each other in a way that feels authentic and honest.

Saoirse Ronan brings a beautiful spirit to the role of the tomboy Jo and the interplay between her and Florence Pugh, as the slightly envious sister, comprehensively captures the rocky, up-and-down relationship that often exists between siblings.  Timothée Chalamet (Call Me by Your Name), as a love struck suitor trying to win Jo’s affections, also deserves praise for his charming, adorable nature and his pitch-perfect hair (kudos to the make-up team).

The most obvious point of difference between Gerwig’s adaptation and previous movies is the use of a second timeline.  We follow the women as teenagers whilst concurrently looking at their future lives (roughly 7 years ahead).  It’s a touch confusing at first (it takes about 30 minutes or so to get your head around which timeline is which) but its value is soon evident.  It helps maintain a brisk pace while also immediately illustrating the ripple effects of key decisions.

Largely shot in a recreated house modelled on Louisa May Alcott’s childhood home in Massachusetts, Little Women is an exquisite drama about art, wealth, family, sisterhood and unrequited love.