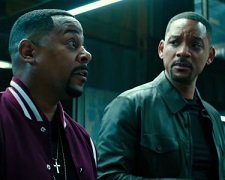 We’re 16 days into the new year and Bad Boys for Life is already the second sequel to be released in Australian cinemas (after A Shaun the Sheep Movie: Farmageddon last week).  You’d have to be living under a rock not to realise that this is the new norm.  Major Hollywood studios have become increasingly reluctant to take risks and they’re relying more and more on existing franchises to put bums on seats and money in executives’ pockets.

That said, even I was a little surprised to see a new Bad Boys flick given the last movie was released back in 2003.  In a recent interview, star Will Smith said he was reluctant to make an additional sequel as he “didn’t want to wreck the franchise” and when he quizzed further by Jimmy Fallon on The Tonight Show, he addressed the elephant in the room by revealing that he “didn’t want to make it just a cash grab.”

This time around, the villain is a Mexican prison escapee (Castillo) who seeks revenge against Mike for killing her son many years ago.  She’s concocted an elaborate plan where her other son (Scipio) travels to the United States and assassinates all those, from judges to forensic scientists, who had a part in her son’s demise.  I had to laugh when I saw she carries photos of her intended victims and then draws an “X” through them as they are eliminated.  Oh, and what’s with the scene where a body falls from the sky, lands on a car, and strangers walking past don’t blink an eyelid?

Corniness aside, the biggest problem with Bad Boys for Life is that is struggles to balance the tone between farcical comedy and emotional drama.  These two characters are trying hard to create something emotional.  Mike (Smith) has to overcome a near fatal injury and clearly has issues regarding intimacy and control.  Marcus (Lawrence) is revaluating his future career following the birth of his grandson.

It’s hard to take these dramatic subplots seriously given the goofy way in which they go about their work.  They take stupid risks, they disobey orders, and they hate relying on others for assistance.  A blind monkey could have identified the lead suspect and yet, despite the array of high-profile assassinations across Miami, neither of these two connect the dots (a dumb plot device to prolong the action).  A small team of personality-free police officers help our heroes but these characters have little to offer except showing up at just the right moments to save Mike from his own foolishness and/or incompetence.

Maybe Will Smith did sign up to this with the best intentions but having seen the finished product, it sure looks like a “cash grab.”  It’s a tired, formulaic, seen-it-all-before storyline and that leaves us with a movie that will be all but forgotten about in a few weeks.  The door has been left open for further sequels but I’m not convinced this will whet the appetite of audiences.