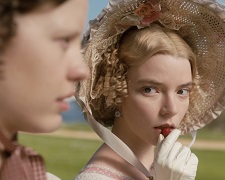 Jane Austen’s works have been continuously in print since 1832 and there’s been no shortage of filmmakers and theatre directors looking to put their own spin on her famous characters.  I’m old enough to remember seeing the last adaptation of Emma on the big screen – released in 1996 with young star Gwyneth Paltrow in one of her first leading roles.  It was an amusing, light-hearted romp that won composer Rachel Portman the Academy Award for best original score (the first female to do so).

This 2020 reworking pulls from the opening paragraph of Austen’s novel in introducing its leading lady – “Emma Woodhouse, handsome, clever, and rich, with a comfortable home and happy disposition, seemed to unite some of the best blessings of existence; and had lived nearly twenty-one years in the world with very little to distress or vex her.”  It’s a pertinent description.  Having been born into a world of wealth and privilege, she has little else to do all day than socialise and play “matchmaker” with her circle of acquaintances.

Emma may look like the ideal companion but her expensive dresses and suave disposition mask a more sinister under layer.  She gossips about people behind their backs, she offers dubious romantic advice, and she acts like she’s better than everyone else (hubris personified).  It’s a tricky role for star Anya Taylor-Joy (Split) but she has successfully created a protagonist who is both interesting and unlikeable.

The film follows several subplots that involve her naively loyal friend (Goth), her hypochondriac father (Nighy), an off-putting vicar (O’Connor) and an elusive suitor (Turner).  The only person who can see through Emma’s façade is her older brother-in-law, Mr. Knightley (Flynn), who relishes a good quarrel and isn’t afraid to point out her flaws.

First-time director Autumn de Wilde has created a beautiful, intoxicating world.  The men are impeccably dressed with their high collars and long coats.  The women wear colourful gowns and elaborate hats.  As if inspired by the techniques of director Wes Anderson (The Grand Budapest Hotel), cinematographer Christopher Blauvelt (The Bling Ring, Mid90s) uses striking symmetry to frame many shots inside the gorgeous mansions.  The bubbly music score adds to the film’s lure.

The richness of the setting doesn’t fully stretch to the characters themselves.  Aside from Taylor-Joy, there’s a shallowness and a simplicity to many of the key players which lessens the film’s emotional impact and makes it harder to buy into the romantic connections.  Bill Nighy keeps rehashing the same joke while the likes of Mia Goth and Callum Turner feel one-dimensional.  The notable exception is Miranda Hart who shows nuance as a kind-hearted, not-so-wealthy woman doing her best to fit in.

Emma. (yes, the official title is ‘Emma’ followed by a full-stop) doesn’t fully capitalise on the potential of the novel but there’s enough fun and wit to charm audiences.