Review: The Professor and the Madman 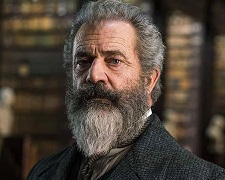 The Professor and the Madman can’t have been the easiest sell to potential financiers.  “Ah… um… have you got a spare $25 million so we can make a film about a guy who wrote a dictionary?”  Yes, it’s based on a book and yes, it stars Academy Award winners Mel Gibson and Sean Penn but it’s hard to look at that storyline and think this movie was going to light it up at the box-office.

It needed some luck… and it didn’t get it.  Having tried to get the project off the ground for years, Mel Gibson enlisted good friend Farhad Safinia as director and the film was shot in late 2016.  What followed were creative disagreements and a huge stoush between the two production companies over who had “final cut”.  Lawyers and judges became involved and Gibson’s company came off second best.  Safinia refused to have his name attached (the credits list the fictitious P.B. Shemran as director) and Mel Gibson did zero publicity.

In the film’s defence, it does ask a curious question – who wrote the Oxford English Dictionary?  Many people were involved but Safinia’s film focuses on two in particular.  The first was James Murray (Gibson), a Scottish teacher who had a detailed knowledge of many languages.  The second was William Chester Minor (Penn), a surgeon with a lifelong love for great literature.  Their work began in the 1880s and Murray confidently tells his children – “there’s not a word you can think of that won’t be in this very big book.”

Unfortunately, The Professor and the Madman struggles to make a compelling narrative from this true story.  There are a lot of subplots involving angry publishers, unexpected love interests, and knowledgeable assistants but when blended all together, you get a puzzling movie that doesn’t really have much to say.  I feel like I could have read Wikipedia articles for 10 minutes and learned more about these characters than I did from the entirety of the film’s two-hour running time.

Mel Gibson and Sean Penn, sporting thick beards and equally thick Scottish accents, are doing the best with the material but ultimately, the finished product doesn’t make an impact.