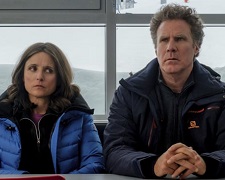 A family is holidaying at a luxurious European ski resort.  They’re eating lunch at a restaurant with a raised outdoor deck.  A controlled avalanche is set off from a nearby mountain.  The fast-moving wave of snow comes hurdling towards the restaurant.  The husband runs from the table and leaves his wife and two children behind.  The avalanches pulls up just short.  The husband returns and pretends nothing has happened.  The rest of the family realise the matriarch’s first reaction in a life-threatening situation was to abandon them.

If you want to see this movie… check out the 2014 Swedish release Force Majeure.  Directed by Ruben Östlund (The Square), it is a beautifully shot, brilliantly told dark comedy about a family which briefly disintegrates following the aforementioned events.  Don’t just take my word for it.  The film won the Jury Prize in the Un Certain Regard section of the Cannes Film Festival and earned a best picture nomination at the European Film Awards (losing to Ida).

I realise why you take great foreign language movies and remake them for English speaking audiences but I’m not sure there’s a single element of Downhill that is the equal of the original film.  It’s a boring, hollow, simplistic movie that lacks the nuance and darkness that made Force Majeure so great.  There’s no point watching it if you’re familiar with its predecessor (even if you’re not, I’d probably advise not to go).

Will Ferrell (Anchorman) and Julia Louis-Dreyfus (Veep) have great comedic talent but have been miscast in their respective roles.  Ferrell appears to rehashing the goofy, meek father figure role that he played in Daddy’s Home.  Louis-Dreyfus is asked to screw up her face and make an awkward expression every time the camera looks her way.  You never truly feel the tension and pent-up emotions they should be experiencing.

Academy Award winning writers Nat Faxon and Jim Rash (The Descendants), along with co-writer Jesse Armstrong (In the Loop), have “dumbed down” the source material and in doing so, the film’s themes and impact have been lost.  The best example is the inclusion of Australian actress Miranda Otto (The Lord of the Rings) as a sex-crazed concierge with an over-the-top European accent.  It’s silly stuff that belongs in a Saturday Night Live sketch as opposed to a biting comedy about troubled family dynamics.  The same applies during a scene where the family confront the resort’s safety team.

Something got lost in translation because Downhill is a vastly inferior remake.