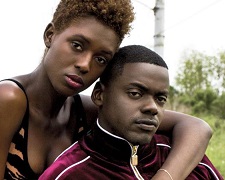 Queen & Slim is a tale of crime, grief and morality… that begins with a Tinder date.  Slim (Kaluuya) swiped right and sent through a message.  Queen (Turner-Smith) took a few weeks to respond but, in need of company after a disheartening day at work, agreed to meet up.  They eat at a cheap diner, engage in a little small talk (sparks aren’t exactly flying), and then he gives her a lift home.  That should have been the end of their association.

It’s during that car ride that Slim is pulled over by a police officer on a quiet, desolate street for failing to make a turn signal and “driving erratically”.  Slim disagrees and there’s an increasingly tense exchange between the pair.  When Queen gets out of the car and tries to film their discussion on her mobile phone, a series of rash decisions forever change their lives.  The police officer shoots Queen in the leg (thinking she was reaching for a gun and not her phone) and Slim responds by taking the officer’s gun and killing him.

There’s not a lot of time for logical thought.  Instincts kick in and, realising they’ve killed an officer with no witnesses to corroborate their version of events, Queen and Slim jump back in their car and flee.  Their goal is to travel roughly 1,000 miles from Ohio to New Orleans to visit Queen’s seedy uncle and lay low for a while.  Adding to their complications is the fact they have no money and their mugshots have been broadcast across the country on regular news broadcasts.

The two lead performances deserve praise.  Daniel Kaluuya, who earned an Oscar nomination two years ago for his unforgettable performance in Get Out, goes through a raft of emotions as Slim.  The adrenalin is pumping as he drives across the country while dealing with the realisation he could be incarcerated for life or never see his family again.  Similar thoughts flood the mind of Queen (played by excellent newcomer Jodie Turner-Smith) but she’s also grappling with painful events from her troubled childhood.

39-year-old director Melina Matsoukas has forged a career in music videos (she’s won two Grammy Awards) but despite a long-time wish to transition, she’d struggled to find the right script to begin her feature film career.  Any hesitations were dispensed when she first read Lena Waithe’s screenplay and realised it was a “beautiful love story” about two people who would not have come together if not for a shared trauma.  It’s a heavy tale but Matsoukas is not afraid to use comedy at opportune moments.  Given a significant chunk of the movie takes place inside the car while on the road trip, I was also impressed by the mix of angles utilised by cinematographer Tat Radcliffe (Pride).

While I enjoyed the film’s vibe, it’s guilty of pushing its themes too hard.  There’s a bunch of scenes where fellow African Americans help them avoid capture but these interludes become repetitive.  A throw-away line about the dead police officer previously killing black people is superfluous (audiences are already on the side of Queen and Slim) and a closing sequence of people looking at TV screens is unnecessary.  The biggest head scratcher is a sex scene interwoven with a police riot (involving a kid we hardly know or care about).

On the whole though, there’s a lot to like about Queen & Slim and it’s important to see African American women (both writers and directors) getting the chance to create stories for the world to engage with.