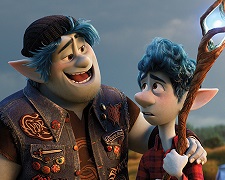 Writers have a lot of creative licence when it comes to animated features.  They aren’t limited by what visual effects artists can generate or by what stunt people can achieve.  Think of the strange world in Spirited Away or the odd-looking characters in The Triplets of Belville or the lovable toys in the Toy Story franchise.  It’s hard to believe such memorable, distinctive imagery could have been crafted if live-action techniques were used.

That said, even I was a little puzzled by the curious domain used in the latest Pixar film, Onward.  It’s a world filled with centaurs, unicorns, mermaids and fairies and yet, despite the fact these creatures have magic abilities, they’ve forgotten (I think?) how to use them because they now rely on technology to go about their daily lives.  It doesn’t make much sense but I’m guessing it’s a metaphor for today’s world and the way scientific advances have many jobs and tasks obsolete.

If you think that’s odd, wait until you hear what the film is about.  16-year-old Ian (Holland) and his elder brother, Barley (Pratt), are two elves who have been raised almost entirely by their widowed mother (Louis-Dreyfus) after their father passed away many years ago.  Using a long-forgotten magic spell and a special gemstone, they attempt to bring their late father back to life for a period of 24 hours but regrettably, it all goes pear-shaped.  Only the “bottom half” of their dad regenerates and so they’re forced to interact with a confused pair of legs that cannot see or hear them.  It’s weird stuff.

What follows is an adventure whereby Ian and Barley go on a lengthy road trip to find another gemstone which they can use to complete the spell and see their “full” father.  They mingle with an assortment of creatures along the way including a stifled manticore (Spencer), a pixie bikie gang, and a bunch of police officers.  It’s anything but smooth sailing and tension grows between the two brothers with each passing hour.

The film’s worthy messages are easy to discern.  It’s about complex sibling relationships and the ways in which loss and grief connect us.  It was inspired by the real-life upbringing of writer-director Dan Scanlon.  His father died when he was just 1-year-old and so the only way he could get an appreciation of his dad’s life was through pictures, home movies and stories relayed by other family members.

I struggled to buy into the film’s concept and the torso-less figure that socialises with the two brothers.  It’s a jagged narrative that doesn’t flow smoothly from scene-to-scene.  I could also see younger audiences becoming confused at times.  Despite its flaws, the film comes together for a powerful, emotional climax in the final 10-15 minutes that may see a few tears shed.  The wait is almost worth it.

With a voice cast including Tom Holland, Chris Pratt and Julia-Louis Dreyfus, Onward isn’t as memorable as other Pixar classics.