Review: The King of Staten Island 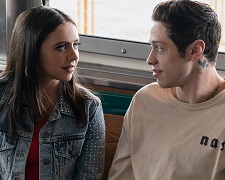 The early 20s can be a difficult age to navigate.  The world’s general expectation is that you are a mature, fully functional, financially independent adult who is contributing to society by working hard and paying bills.  The reality can be quite different.  Despite the best intentions, it’s often hard to move out of home, pick a viable career path, land a decent job, avoid addictions, and find quality friends/lovers.  Life is tough.

This theme is explored in The King of Staten Island, a film loosely inspired by the upbringing of 26-year-old actor-comedian Pete Davidson (Saturday Night Live).  He teamed up with Judd Apatow (The 40-Year-Old Virgin) and Dave Sirus to write a screenplay that was “75% autobiographical” and would serve as a “love letter” to his family.  Davidson has openly struggled with his mental health and he hopes the film will be helpful to viewers in a similar position.

It’s tough enough to create a producible script but Davidson takes on the additional challenge of acting in the lead role.  He plays 24-year-old Scott Carlin, a chatty, socially awkward “manic” who smokes weed, takes anti-depressants and hides in the corner at parties.  He has no job, he still lives at home with his mother (Tomei) and his college-bound sister describes him as looking like “the guy who sells crack under the bridge.”  When asked about his future, Scott speaks of his illogical plan to create a chicken restaurant that also serves as a tattoo parlour.

The King of Staten Island is an interesting character study in that there’s a lot to like and dislike about Scott.  On one hand, you feel empathy because he’s been diagnosed with ADHD and still carries the scars from the death of his firefighter dad (Scott was just 7 years old at the time).  On the other hand, he wallows in self-pity, chooses not-so-great friends, and struggles to take responsibility for his own actions.  He can be a stressful burden on those around him.

Davidson, Apatow and Sirus have gone with a slightly lighter approach in tackling the subject matter.  There were times when I thought the film would go down a darker, heavier path but each time, it pulls back and offers a window of opportunity for Scott to open.  The end result is a feel-good flick that offers as much comedy as it does drama.  The fact Scott verbalises almost every inner thought helps create some memorable one-liners.

It’s a little long and a few subplots feel unnecessary (such as an out-of-nowhere scene involving a robbery) but The King of Staten Island is worth seeing for its humour, its themes and its performances.