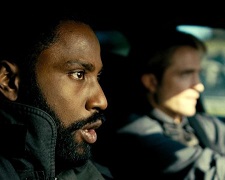 It took several viewings but I ultimately came to the conclusion that Christopher Nolan’s 2014 sci-fi epic, Interstellar, was a flawed masterpiece.  It’s got a quality cast, moves at an energetic pace, and features a career-best film score from composer Hans Zimmer.  Despite all of that, Nolan tried to squash 20 hours’ worth of ideas into 2 and the end result feels rushed, fragmented and, at times, incoherent.  The emotional family stuff didn’t resonate either.

I refer to Interstellar because, on leaving the theatre after a first look at Tenet, the same thoughts were rummaging through my mind.  This is another grand project with big, intriguing concepts but when you bring it together, it just doesn’t flow.  You’ve got characters hastily explaining time-twisting technologies intertwined with elaborate, heavily-edited action pieces.  Having just finished Dark, the excellent 26-episode German time travel series on Netflix, it made me wonder if Nolan’s material was better suited to the longer TV form.

Time travel movies are nothing new but Nolan adds a different spin here by exploring the concept of “inversion”.  Instead of jumping into a time machine and transporting yourself to a particular point in history, inversion allows you to push the rewind button and move backwards through time.  The problem is that it’s hard to do this discreetly.  It’s going to look rather obvious to normal, forward-moving folk when they see a car reversing back at them at 100 km/hr on a freeway.

I think there are a few holes/conveniences with the broader idea (a scientist covers that by saying “don’t try to understand it”) but the crux of the story is centred on a man appropriately named The Protagonist (Washington) who is tasked with “preventing World War III”.  A wealthy Russian crime lord (Branagh) has access to inversion technology and, as you can imagine, it’s incredibly dangerous in the wrong hands.  Who needs nuclear bombs to destroy the world when you can just change time instead?

Nolan has assembled another terrific cast.  John David Washington (BlacKkKlansman) is excellent in the lead and I love the professional chemistry between he and his offsider, played by Robert Pattison (Twilight).  Australian Elizabeth Debicki (The Great Gatsby) is also very good as the villain’s estranged wife.  I wasn’t as convinced by Kenneth Branagh (Hamlet) as the bad guy.  An important ingredient of any top-notch action film is a great villain but the more this film progressed, the more I realised Branagh’s character lacked logic and nuance.

The set action pieces are chaotic but also fun.  You might be scratching your head as you watch two people fight – one moving forward through time and one moving backward through time.  It’s not something I can recall seeing on screen before.  The film score from Oscar winning composer Ludwig Göransson (Black Panther) also deserves a mention for the additional energy in brings to the overall production.

While Tenet earns points for being creative, it can’t avoid succumbing to traditional action clichés.  As an example, there are lengthy, heartfelt conversations between two people while the world implodes around them.  It was also hard to rationalise the strong bond forged between The Protagonist and the Russian’s wife and child given what’s at stake.

It’s bitten off more than it can chew but with the positives balancing out the negatives, Tenet deserves a look.  In this COVID-19 world, it’s nice just to see a blockbuster on the big screen again.