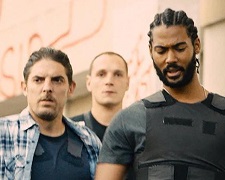 Les Misérables arrives in Australian cinemas with big wraps.  It shared the Jury Prize (effectively third place) at the 2019 Cannes Film Festival, it won best film at the César Awards (the French Oscars), and it was nominated at the Academy Awards for best international feature (losing to the popular Parasite).

My only qualm is the title itself!  When I first heard about the film, my reaction was “do we really need another version of Victor Hugo’s Les Misérables?”  It’s a great story but having seen the live action musical, the 1998 film with Liam Neeson, and the 2012 adaptation starring Hugh Jackman, it felt like a tale that had been told enough.

The good news is that, for the most part, this has absolutely nothing to do Hugo’s famed work.  You don’t need to worry about Jean Valjean being captured or Fantine signing “I Dreamed a Dream.”  This is a very different film.  It’s a contemporary story set in 2018 that delves into current day issues including crime, corruption and multiculturalism.

42-year-old filmmaker Ladj Ly based it on his own experiences growing up in the Montfermeil, a commune to the east of central Paris with a population of roughly 30,000 people.  It’s an area that is home to many African immigrants who suffer due to high unemployment, poor housing conditions, and regular police harassment.  Ly has had a love of filmmaking since a teenager and this, his first feature film, provide him with the opportunity to show the world what his fellow Montfermeil residences endure on an ongoing basis.

There are several groupings of characters who include three police officers, a group of young kids, a performing circus, and a powerful “mayor”.  When a small lion cub is stolen from the circus, it sets in motion the events that lead to the film’s emotional climax.  Audiences will be quick to form opinions of these characters but, to the movie’s credit, those views will change throughout as we get to know them a little better.  When it comes to labelling people as good or bad, the film reminds us that there are many different perspectives from which to make an assessment.

French President Emmanuel Macron saw the film himself in late 2019 and was rocked by its power and authenticity.  He has reportedly been working with government ministers to improve the situation Montfermeil.  That endorsement says more than any review ever could.  It highlights the importance of quality cinema and how it has the ability to instigate change.  See this film.