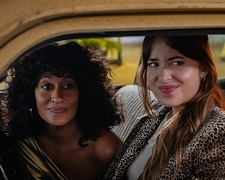 In late 2019, Mariah Carey’s reboot of the festive song “All I Want for Christmas is You” went to #1 on the weekly Billboard Hot 100 chart.  It was just the 7th time (the list began in 1958) that a solo female artist over the age of 40 had claimed the top spot – the others being Tina Turner, Aretha Franklin, Bette Midler, Cher, Madonna and Sia.  It’s worth noting that just one of them was over 50 – Cher in 1999 with her chart-topping “Believe”.

Highlighting the ageism that exists within the music industry, particularly when it comes to women, was a major attraction for Canadian director Nisha Ganatra (Late Night) on reading the script from first-time screenwriter Flora Greeson.  Greeson drew on her own experiences working as an assistant at Universal Music in New York City and as an assistant for a talent agency in Los Angeles.  That’s part of the reason why, similar to The Devil Wears Prada, the story is told from the perspective of the “hired help” and not the high-profile celebrity.

To delve into the film’s narrative, Maggie Sherwoode (Johnson) has spent the last three years working as the personal assistant to 11-time Grammy Award winning R&B singer Grace Davis (Ross).  It’s tough, demanding work but Maggie relishes the opportunity to get “up close and personal” with an artist she has long-admired.  Her best friend (Chao) sees things a little differently and, sensing Maggie’s career progression has stalled, justifiably asks “can you please want more from yourself?”

There are several subplots but two feature most prominently.  The first is the exploration of the relationship between Maggie and Grace.  It’s an interesting dynamic when someone is hired in a professional capacity but, slowly over time, becomes of more value in a personal capacity.  Still, there are always going to be points of tension when expectations and responsibilities become blurred.  The interaction between Dakota Johnson (Fifty Shades of Grey) and Tracee Ellis Ross (Black-ish) in these two lead roles is the film’s strongest attribute.

The second key narrative involves Maggie partnering with a young singer-songwriter named David (Harrison Jr) who she first meets in a music store.  Misrepresenting herself as an influential producer, she takes David under her wing, organises studio recording time, and tries to set him up for stardom.  This is a clumsier, less credible storyline that includes a splash of unnecessary romance.

For those looking for insight into the music industry, The High Note has something to offer.  One of the most powerful scenes features Grace sitting at the head of a boardroom table while a group of music executives, who are all male, try to coax her into making an uncomfortable decision.  A subsequent argument between Maggie and Grace in the female bathroom further emphasises their conflicted psyches.

The High Note doesn’t tick every box but it’s easy to watch and easy to enjoy.