Review: On the Rocks 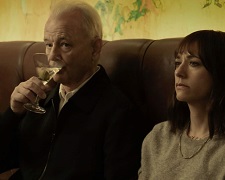 Even before the arrival of COVID-19, the relationship between production companies, streaming platforms, and movie theatres was starting to change.  We saw it last year with two Oscar nominated films – The Irishman and Marriage Story.  They were financed by Netflix, produced by separate companies, screened for a few weeks in cinemas (to qualify for awards season), and then immediately made available to stream.

That same model has been picked up by Apple TV who, over the past two years, have secured details with smaller distribution companies (A24, Bleecker Street, Greenwick Entertainment) to create original content.  Their first major title is On the Rocks and it’s likely to attract attention given it stars Bill Murray and is written and directed by Sofia Coppola.  It’s their first big screen collaboration since 2003’s award winning Lost in Translation (as likeable today as it was back then).

Unfortunately, those expecting something the equal of Lost in Translation will be disappointed by this latest creation.  It’s a slight, less profound movie that lacks the humour and life-affirming messages that made their earlier film so memorable.  The crux of this tale revolves around trust and fidelity.  Laura (Jones), a mother with two daughters, suspects her husband (Wayans) is having an affair with a co-worker based on the limited amount of time he is spending at home.

Voicing these concerns to her alcohol-loving father, Felix (Murray), the pair team up and become quasi private detectives.  They look through his mobile phone, monitor his calendar, and drive around town following his late-night movements.  This could have been given the full dramatic treatment (ala Marriage Story) but Coppola has gone with a lighter touch.

For example, there’s a scene where Laura and Felix recklessly weave through the streets of Manhattan in a red Alfa Romeo (not exactly discreet) before sweet-talking a naïve police officer out of a dangerous driving fine.  It’s one of numerous sequences that feels clumsy, contrived and unoriginal.  It certainly doesn’t generate the laughs that Coppola would have been seeking.

Rashida Jones (The Office) and Bill Murray (Caddyshack) are both accomplished actors and whilst they are trying to illustrate the rocky relationship between father and daughter, it’s a challenge given the imperfect screenplay.  The most interesting cast member is Marlon Wayans (Requiem for a Dream) who, in a rare yet refreshing dramatic role, keeps you guessing as to his thoughts and intentions.

Culminating with a rushed, goofy moment in Mexico, On the Rocks is a weaker inclusion on Sofia Coppola’s otherwise strong resume.