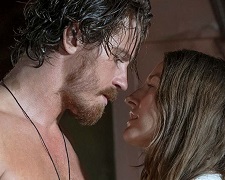 Two strangers meet in a small seaside fishing town in Western Australia.  They chat, they hook up, and they fall in love.  All of this happens inside the opening half-hour of Dirt Music, the latest from director Gregor Jordan (Two Hands).  You might hope this is the start of a long, beautiful relationship but the problem is that neither person is allowing themselves to be happy.

These two characters know they’ve got demons to exorcise but, for those of watching the movie, we don’t know what they are.  Thus, the majority of the film is about filling in those gaps via gradual reveals and short flashbacks.  It’s a formula that might have worked in the pages of Tim Winton’s 2002 award winning novel, on which the movie is based, but it’s less effective in cinematic form.

Stars Kelly Macdonald (No Country for Old Men) and Garrett Hedlund (Tron: Legacy) struggle to make much of the material.  As the guy, Hedlund is the quiet, mysterious type who keeps to himself and avoids conversations.  As the girl, Macdonald is more open with her thoughts but she’s directionless when it comes her career and future plans.  Australian David Wenham (The Lord of the Rings) also has a role to play but his character is slight and poorly developed.

Dirt Music wants to elicit an emotional reaction but it fails to do so.  There’s a scene where Macdonald learns a shocking truth and it’s immediately followed by a sequence of her playing with sand on the beach.  It’s one of many odd moments that shake the film’s credibility.  Is that really how someone would react?

The final nail in the film’s coffin comes in the form of a head-scratching climax.  It’s hard to understand what’s going through their minds as they stumble across a group of rocky islands off the coastline (without giving too much away).  There are corny lines (“I just need a one-way ticket”) and a final, cliché-laden scene that defies comprehension.

The cinematography from Sam Chiplin might be good for tourism in Western Australia (particularly when the borders open back up) but if you’re looking for a great movie with interesting characters and an engaging storyline, look somewhere else.