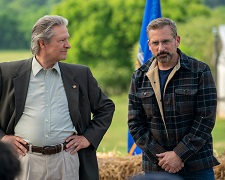 Irresistible is a fictional tale that begins with a real-life event.  You’d have to be living under a rock to not recall 8 November 2016 – the night on which Donald Trump shocked many pundits and became the 45th President of the United States.  It provided a sobering wake-up call to the Democratic Party who lost key swing states including Michigan, Pennsylvania, Wisconsin and Florida.

Campaign consultant Gary Zimmer (Carell) is still reeling from the result and is strategizing ways for Democrats to win back votes in the “American heartland”.  His team stumble across a recent Youtube video of a Marine Corps veteran, Jack Hastings (Cooper), standing up in a town hall meeting and passionately criticising the decisions of the long-time Republican mayor.

Gary senses an opportunity.  He flies to Wisconsin, meets with Jack, and convinces him to run in the upcoming mayoral elections as a Democrat.  The town of Deerlaken may be home to just 5,000 people (who all seem to know each other) but Gary realises that if the Democratic Party can win the election, it’ll send a broader message that his party can connect with rural America.

What follows is a dirty, messy mayoral election that unexplainably becomes the talk of news networks across the country.  Realising the Democrats are bringing in big teams and big money, the Republican Party retaliates by bringing in one of their top consultants, Faith Brewster (Byrne).  It reaches the point where the town has been completely overrun by news/political folk and the locals are struggling to find a seat in their normally quiet bars and cafes.

There’s no shortage of great political comedies to come out of the United States.  Any “must see” list would include Bulworth, Wag the Dog, Election, In the Loop and Dave.  The problem with Irresistible is that it’s not selling any new messages (e.g. we know money ruins politics) and, by over-exaggerating every scene, it’s pitching itself to the lowest common denominator.  I was expecting something with more edge given it’s written and directed by comedian/TV host Jon Stewart.

The depiction of Steve Carell’s character is the best example in terms of the film’s zany tone.  He tries to act like a “normal guy” but it’s clear to everyone that his a posh wanker who is detached from reality.  When he arrives in Deerlaken, he’s rude, he’s condescending and he’s using complex political jargon that the townsfolk can’t understand.  This asks the obvious question – how has Gary been a success within the industry for so long and why is he employed by the Democratic Party?  It’d be like getting me to teach chess (footnote: I can’t play chess).

With so much focus placed on Gary’s character, others unnecessarily fall by the wayside.  A lot of good points are made in Jack’s original Youtube video but once the election campaign gets started, we learn next-to-nothing about his policy platform and how he intends to reinvigorate the struggling town.  Rather than delve into ways that American can be transformed for the better, the film falls back on easy laughs (like Carell being mean to a coffee shop owner).

Irresistible represents a missed opportunity to show the world something new when it comes to dirty politics.