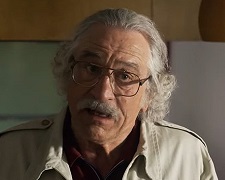 Hollywood loves making movies about Hollywood.  I could spend an hour going through them all but the list includes Singin’ in the Rain, Sunset Boulevard, The Player, Get Shorty, Ed Wood, For Your Consideration, Mulholland Drive, The Artist, Argo and the aptly titled Once Upon a Time in Hollywood.  The Comeback Trail appears to be the latest entry into the club but in fact, it’s not a new member.  The same storyline was used in a low-budget movie that was shot in the 1970s and released with no fanfare in 1982 (it didn’t even go to VHS or DVD).

This new adaptation, directed by George Gallo, brings together three Oscar winning actors who each have more than 50 years’ experience in the industry – Robert DeNiro, Morgan Freeman and Tommy Lee Jones.  DeNiro plays Max Barber, a penniless producer who is desperate for a big hit.  Freeman plays Reggie Fontaine, a ruthless mobster who put up the finance for Max’s last unsuccessful venture.  Jones plays Duke Montana, a washed up actor who is seriously contemplating suicide.

These three have teamed up to make a new corny western – the tale of an elderly cowboy who discovers he has Indian blood and then rises up against property developers.  The catch is that they’re involved for VERY different reasons.  Duke sees it as a chance to reinvigorate his sagging career and make one last great movie for people to remember him by.

The other two aren’t quite as genuine.  Max knows the script is garbage and he’s hoping Duke dies during an elaborate stunt (on the first day of shooting if possible) so he can collect a huge insurance payout and use it to fund a separate dream project.  Reggie is equally dodgy and wants a cut of the proceeds to recover his losses from Max’s previous flop.

In trying to make an interesting movie, it helps when filmmakers are one step ahead of the audience.  In the case of The Comeback Trail, it’s unfortunately the other way around.  You can see exactly where the storyline is going and so when “surprises” are revealed, they’re anything but.  It’s for this reason the film loses momentum from the start of the second act.  It gets stuck in a repetitive lull as we follow Max and his clumsy efforts to kill his leading man (parts are reminiscent of a Road Runner cartoon).

There are also credibility issues.  The more you think about the narrative, the less sense it makes.  The cowboy film looks awful and has an incompetent crew.  It’s impossible to believe anyone involved thinks it’ll be a success.  How they managed to find the perfect camera angles to the flawed stunts in one-take without any rehearsals will forever be a mystery.  It lacks the intelligence and nuance seen in Argo (a much better effort about a “fake movie”).

There’s an early scene where Max notes that if a film turns out to be good, it’s a miracle.  Despite a half-decent idea and the best intentions, no miracle occurred with The Comeback Trail.