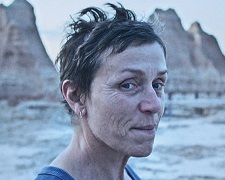 In 2016, I hired a car with a friend and went on a golf-related road trip from New York down to Florida (visiting 10 states in total).  I passed by gated communities with large mansions, manicured lawns and idyllic views.  I also drove through small towns where every second place was boarded up and residents were sitting on the sidewalk with little to do.  Wealth inequality exists all around the world (that’s no secret) but to see the contrast presented so starkly in the space of a few days in the United States left an impression I’ve often reflected upon.

Nomadland opens our eyes and has us looking at a part of America that is seldom explored in cinematic form.  There are people who have given up their homes, for a variety of reasons, and now travel around the country in “wheel estate” – vans, campers, cars and rundown RVs.  They have no fixed address (that itself creates legal issues) and they pick up short-term casual work to cover their few costs – the biggest ones being food and petrol.

Two-time Oscar winner Frances McDormand (Fargo) is central throughout with her performance as the 60-something-year-old widower Fern.  She lost her house and her factory job in the aftermath of the economic downtown that rocked the United States a decade ago.  Unable to find permanent work and too young for retirement benefits, Fern now travels around the country in a simple van with a few small modifications (it’s only worth a few thousand dollars).  Despite her tough financial circumstances, she maintains an upbeat attitude and describes herself as “houseless” as opposed to “homeless”.

Fern is a fictional character but the others you’ll meet in the film are not.  Chinese director Chloé Zhao (The Rider) blurs the line between documentary and drama by using non-professional actors she encountered while travelling across America’s west.  Producers visited actual nomadic settlements a few days in advance of the shoot, listed to residents’ stories, and chose a select few to appear on screen.  It was a loose, spontaneous process that proved effective.

Those we see Fern interacting with include a Vietnam veteran dealing with post-traumatic stress disorder and folks who have lost family members to cancer and suicide.  There’s an unspoken bond between the nomads where they offer help and support to each other.  This could be as simple as listening to stories around an open fire or something more tangible such as sharing sustainability ideas or exchanging food, utensils and furniture.

Backed by a beautiful film score from Italian composer Ludovico Einaudi, Nomadland pulls you into this world and makes you feel part of it.  It doesn’t offer huge character transformations or a “they all lived happily ever after” finale.  It’s the kind of movie that asks you to observe.  You’ll care about these fragile people while also reflecting on the structural issues in society that allows them to be so easily abandoned.  It’s far from “black and white” though.  Some take comfort from the nomadic lifestyle and there’s a powerful conversation shared between Fern and her sister that touches on this point.

Winner of the prestigious People’s Choice Award at the 2020 Toronto International Film Festival, where Green Book and Jojo Rabbit have won the last two years, Nomadland offers much to think about.