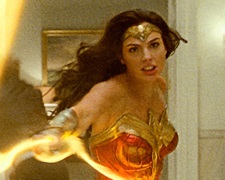 The COVID-19 pandemic has provided us all with an unexpected… but perhaps timely break from the superhero genre.  The last big blockbuster was DC Films’ Birds of Prey back in February 2020 and for devotees of the Marvel Cinematic Universe, there’s been nothing since Spider-Man: Far From Home was released in July 2019.  Given the challenge of keeping these films fun, fresh and original (particularly with heavy studio influence), I’ll admit to not having missed the genre too much.

All of that said, I could still feel a pinch of adrenaline running through my blood stream during the action-packed (but also irrelevant) opening to Wonder Woman 1984.  Those here in Australia have the opportunity to enjoy this $200 million blockbuster on the big screen in packed theatres… provided you’ve done the QR code check-in.  It’ll be the busiest we’ve seen cinemas all year.

The original Wonder Woman took place near the end of World War I but, as made clear by the title, this sequel is set in a world with big hair, stilettos, shoulder pads and parachute pants.  Wonder Woman (Gadot) aka Diana Prince is still doing her thing – saving the world and remaining anonymous – but despite her incredible powers and inability to age, she’s not immune to the effects of loneliness.  It’s been close to 65 years since she lost the love of her life (Pine) and, strangely, she hasn’t been able to move on and meet someone new.

Every action film requires a villain and here, the responsibility falls upon Chilean actor Pedro Pascal (Game of Thrones, The Mandalorian).  He plays Maxwell Lord, a dodgy businessman who would give Bernie Madoff a run for his money.  Lord pitches himself as wealthy TV personality who has profited from oil investments but in reality, he’s just the orchestrator of a Ponzi scheme on the verge of collapse.

There’s a lengthy back story (too long for my liking) but Lord ultimately gets his hands on an ancient phallic stone that can grant each holder a single wish.  He outsmarts the object by transferring all of its wishing abilities across to him and this provides Lord with unlimited power – tricking others to do wishes for his benefit while destroying those who stand in his way.  It doesn’t make a lot of sense (you’d think one person might wish for him to lose his power) so it’s best not to think too deeply.  In terms of his motives, there’s not much nuance there either (wetting the bed… really?)

I enjoyed the first movie in this franchise, I’m energised by Hans Zimmer’s music score and I think Gal Gadot is a terrific choice for the lead role.  However, this is a formulaic superhero movie that takes few chances.  There’s the standard mid-film scene when Wonder Woman has the chance to take down the villain but instead, she’s distracted by the need to save some unrelated kids in danger.  There’s also a feeble attempt by the writers to tug on the heartstrings when Wonder Woman must choose between her own love and everyone else’s happiness.  Oh, let’s also not forget the abundance of slow-mo bullets.

Stretching out an unnecessarily long 151 minutes, Wonder Woman 1984 comes up short when compared to its predecessor.