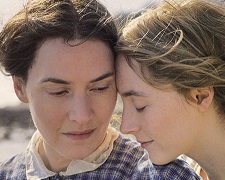 A period piece with minimal dialogue about two quiet, repressed woman who collaborate on a project, take walks along a rocky coastline, and ultimately have a short, passionate love affair that sticks with them forever.  If it sounds like a movie you want to see, I’d suggest streaming/buying Céline Sciamma’s Portrait of a Lady on Fire (one of my top 10 movies of 2019).  Its emotions resonate strongly, the performances are outstanding, and every scene has been thought through in immaculate detail.

In creating Ammonite, British writer-director Francis Lee (God’s Own Country) uses an analogous storyline and adopts similar techniques but when making the comparison, it feels a lesser version of Sciamma’s film.  It’s still worth seeing but the leading characters are less interesting and their development feels more stilted.  It’s a long wait to get to the film’s emotional punch.

Set in the 1840s, Lee has made the curious decision to create a fictional love story involving real-life people.  Mary Anning was a pioneering palaeontologist who roamed the English shoreline and unearthed Jurassic fossils during the first half of the 19th century.  Some of her discoveries can be viewed today in London’s Natural History Museum.  You’ll find her name in modern day encyclopaedias but she wasn’t well known at the time given the sexist, male-dominated nature of her industry (e.g. the Geological Society of London didn’t admit women as members until 1904).

Portrayed in the film by Oscar winner Kate Winslet (The Reader), the Mary Anning we’re introduced to is a rude, abrupt woman.  She’s living just above the poverty line and she resides with her nagging mother (avoiding small talk wherever possible) in a small home that also serves as her workshop.  You get a sense that continual disappointments throughout her life, both personally and professionally, have worn her down to the point where she cares about very little.

It’s at work where she’s introduced to Charlotte Murchison (Ronan), a melancholic woman trapped in a loveless, one-sided marriage.  Her husband (McArdle) is a geologist off on a 6-week European expedition and while away, he asks Mary to provide his wife with support and friendship.  Mary wants nothing to do with the idea but the offer of financial reward is too hard to overlook.

It 's a lengthy wait (the above takes about an hour to establish) but a relationship finally develops between the pair.  Charlotte comes alive with a burst of excitement and happiness and these same personality traits are taken on by Mary who lets down her guard.  Their fervent love scenes make quite a contrast from their frosty first meeting.

Ammonite could have used more pace during the first two acts but the climax and worthy performances of stars Kate Winslet and Saoirse Ronan provide ample compensation.