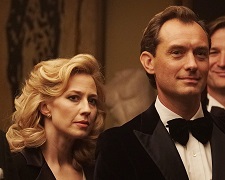 There’s a moment in The Simpsons where Mr Burns speak of his incredible wealth and says “but I’d trade it all for a little more”.  It’s the first thought that came to mind in describing Rory O’Hara (Law), a commodities trader who yearns for financial wealth above all things.  He has a nice home with a backyard pool in New York but he’s given it up and taken his reluctant wife and two teenage kids to London to “make some real money”.  Given they’ve moved 4 times in the past 10 years, you get a sense it’s not the first time they’ve made such a leap for those reasons.

Rory is a superficial, compulsive liar.  He puts an exhaustive amount of time into “appearing successful” as opposed to doing the hard yards and earning his achievements.  When out with work colleagues, he picks up the full tab for their expensive lunch.  When at a party, he brags about his non-existent New York penthouse.  When at a business dinner, he tells prospective clients he can get them tickets for an acclaimed Anthony Hopkins play.  The reality is that Rory has next-to-nothing in his bank account and, despite all the confidence he exudes publicly, he has no meaningful plan to fix his financial free fall.

Written and directed by Canadian Sean Durkin (Martha Marcy May Marlene) and set in the year 1986, The Nest delves into Rory’s insecurities while also looking at the way his self-destructive actions impact on the rest of the family.  His wife, Allison (Coon), interchangeably provides support and criticism to her husband’s ideas.  There’s a great scene where they go out for a fancy dinner and argue over what to order.  The two children are witness to their parents’ disagreements with the eldest (Roche) using it as opportunity to behave badly.

Their new home in London, an unfurnished mansion in the middle of nowhere, could be considered a character in itself.  It’s far too big for them (typical of Rory’s vain nature) and so many rooms remain vacant.  It gives the place a creepy vibe to the point where the youngest son (Shotwell) gets scared walking through the long, darkened corridors at night.

Rory and Allison are flashy, interesting cinematic figures but the character arcs they’re provided with are limited.  You get to know them both during the opening half-hour and beyond that, there’s not a lot on offer in terms of change and development.  There’s a random sequence involving Rory and his estranged mother that feels unnecessary.  The same could be said of a quirky subplot involving the fate of Allison’s prized riding horse.  I’d have preferred to see more interaction with the vulnerable kids who have been pushed too far into the background.

The Nest deserves a look but it misses an opportunity to become something more distinct and memorable.