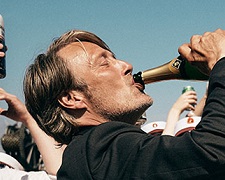 Four male high school teachers, who have been friends for years, have gone out for a nice dinner to celebrate a 40th birthday.  Much is discussed but at one point, the focus turns to a Norwegian philosopher who proposes that people are better functioning when they have a blood alcohol content of 0.05%.  They’re more relaxed, they’re more poised and they’re more open.

This curious quartet then make a pact and, as part of an informal written thesis, decide to put theory into practice.  From the moment they wake up of a morning, they continually consume enough alcohol to remain around the 0.05% mark throughout the work day.  They even carry around a breathalyser to help measure!  It’s as if they’ve become opposites of the general population – drinking during the day but never at night or on weekends.

There’s a motivation behind their madness (if you want to call it that).  The central character, Martin (Mikkelsen), is having somewhat of a mid-life crisis.  His marriage is waning and he’s worried that his wife sees him as just a boring, empty shell of the man she originally married.  His time at school isn’t much better.  His students, all in the final year of education, are worried they won’t get the grades they require to go to college and they’ve expressed concern about Martin’s tired teaching methods.

I’m not sure I’d be recommending the idea to my own friends but Martin’s world improves with a little alcohol in his system.  He starts talking more with his wife, his organises a short family vacation with his two sons, and the kids at school soak in more content with his newfound approach.  Similar benefits are discovered by the other three men who find their lives are becoming more appealing and fruitful.

In different hands, such a narrative could be used to create a silly, far-fetched comedy in the same vein as The Hangover and Bad Moms.  Instead, Danish writer-director Thomas Vinterberg (The Hunt) threads the needle and goes with a darker style comedy.  These characters aren’t over-the-top caricatures.  Yes, we laugh at their actions but they’re real, honest human beings and many will relate to their problems and their mindset.

It’s not a “preachy” film either.  There’s not some grand revelation where the men realise alcohol is evil, swear never to drink again, and then live happily ever after.  There’s nuance to the issues being explored and that’s particularly evident during the film’s unusual climax which takes place at a marina.  It’ll leave you thinking about what these characters have learned and where they’ll end up.

It’s a touch repetitive during the middle act (a lot of fun without any hint of consequences) and relies on a few hooks too heavily (the thesis writing) but for the most part, Another Round is an interesting piece of Danish cinema.  The Golden Globe nomination it picked up this week for best foreign language film will help boost its already growing profile.