Review: Raya and the Last Dragon 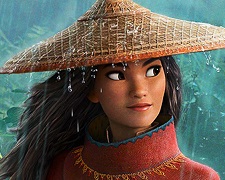 We’ve seen it in the United States due to the impact of COVID-19 but here in Australia, Raya and the Last Dragon marks the first time a major Hollywood production is being released simultaneously in movie theatres and on a streaming platform.  You can head to your local cinema and pay the usual ticket price (ranging from $10-$20 per person) or, if you already have a subscription to Disney+, you can hand over $35 and watch it with as many people can fit in your lounge room.  I don’t believe this dual release will become the norm in a post-pandemic world but it’ll be interesting to see the split in viewer numbers.

Written by Adele Lim (Crazy Rich Asians) and Qui Nguyen, Raya and the Last Dragon is an animated adventure set in a divided fantasy world.  Once upon a time, humans lived harmoniously alongside dragons with the later bringing water, rain and peace to all.  That all changed when a shape shifting enemy, known as the Druun, turned almost everyone into stone statues.

An insecure dragon, Sisu, was able to harness her family’s powers and destroy the Druun but it came with an unfortunate side-effect.  While all human statutes returned to their living form, the dragons did not.  All that remained of their kind was a glowing gemstone said to contain the last piece of dragon magic in the world and which keens the Druun from ever returning.

It’s been 500 years since that fateful event and the dragon-free world has fractured into 5 distinct kingdoms filled with warriors, mercenaries and assassins.  It’s a little reminiscent of Game of Thrones in the sense their egotistical leaders yearn for more wealth and power.  They resent the fact one kingdom has sole custody of the gemstone and while its level-headed custodian (Kim) seeks diplomacy, the others aren’t interested.  A battle ensues, the gem is broken into 5 pieces and the Druun return.  To borrow the famous saying from George Santayana – “those who cannot remember the past are destined to repeat it.”

The future of humanity now rests of the shoulders of an unlikely young woman named Raya (Tran).  Guided by an ancient map, she locates the spirit of Sisu (Awkwafina) and brings the famed dragon back to life.  The pair team up, find a few supporting players to help, and travel to each kingdom with hope of locating the missing gemstone fragments.  The end goal is to piece them together and destroy the Druun one last time (we hope).

The analogies are laid on thickly.  It’s clear from the outset this is a movie about respecting each other’s differences, sharing wealth, and coming together to make the world a more fruitful, trustworthy place.  I do wish there was a little more nuance.  It’s simplistic in its depiction of “heroes” and “villains” to the point where it feels more like a cheap Saturday morning cartoon than a rich animated feature.  There are scenes where people are fighting for the sake of fighting and it’s hard to discern their motivations (considering the Druun are on their doorstep).

There’s still fun to be had here.  As the voice of the dragon, Awkwafina (The Farewell) steals the show with a mix of charm and wit.  There’s an early sequence where she humorously compares herself to the weak link in a group assignment who rides the coattails of others to get a strong grade.  It’s one of several great one-liners as she, failing to appreciate how much the world has changed over 500 years, bumbles her way from scene-to-scene.  Her character’s naivety serves as both an asset and a liability.

It’s not one of Disney’s better animated features and I don’t think there’s a lot on offer for the adults but Raya and the Last Dragon does just enough to engage younger audiences.