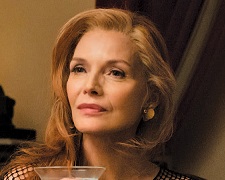 I loved the way writer-director Woody Allen approached the “riches to rags” narrative in his 2013 effort, Blue Jasmine.  Cate Blanchett won an Academy Award (and just about every other award) for her performance as a wealthy socialite who loses everything when her husband is convicted of fraud and sentenced to prison.  The film finds the right balance between ridicule and respect.  As I said in my review at the time – “Just when you start to feel empathy towards Jasmine, she’ll do something or say something to instantly squash such feelings.”

French Exit has been crafted from the same mould with writer Patrick deWitt adding a curious splash of the supernatural (the less said, the better).  The central figure is Frances Price (Pfeiffer), an egotistical mother from New York City who was born into wealth and privilege and has never worked a day in her life.  She describes herself as “odd” and “difficult” and wears these terms like a badge of honour.

Frances detests change but unfortunately, it’s about to be thrust upon her.  Her wealthy husband passed away 12 years ago and having burned through much of his estate, she’s reached the point of insolvency.  She can’t even afford to pay the servants (the last cheque bounced).  With few other options, she sells her remaining assets and moves to Paris with her 20-something-year-old son, Malcolm (Hedges), where they can stay for free in the apartment of a long-time friend.  It’s the only way of maintaining her current lifestyle.

French Exit is to be enjoyed for the lead performance of Michelle Pfeiffer.  There are times when Frances comes across as cruel, heartless and condescending.  This is illustrated in a sequence where she is invited to dinner by a friendly American woman (Mahaffey) living in Paris.  As the film progresses, the curtain is slowly pulled back and we see a softer, more insecure side to Frances via exchanges with her son, her pet cat, and an unorthodox “witch”.

In the same vein as Blue Jasmine, French Exit straddles the line between comedy and drama.  There are moments that provide unexpected, eyebrow-raising laughs (e.g. the refrigerator scene) and there are more sensitive moments that delve into the bond between a self-destructive mother and her loyal son.  It’s a little sluggish in terms of pace but it’ll keep you on your toes and you’re never quite sure what’s behind each corner.

I’m not fully convinced by what it all adds up to but the quirkiness of French Exit makes it worth the trip.

You can read my chat with star Lucas Hedges by clicking here.