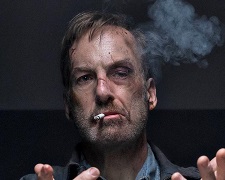 The creative juices can flow for a number of reasons but, curiously, the idea for this movie came to actor Bob Odenkirk (Breaking Bad, Better Call Saul) after a home invasion.  His house was broken into while he, his wife and his two children were upstairs.  Describing it as a “particularly traumatic” experience, Odenkirk made a snap decision to not confront the burglars so as to avoid violence and to keep his family safe.  A police officer later said to him – “It’s not what I would have done, but you did the right thing.”

In the same vein of Sliding Doors, Odenkirk thought about an alternate reality.  What if, instead of a passive, non-confrontational approach, he submitted to his primal instincts, took matters into his own hands, and went after the people responsible?  The idea was given to screenwriter Derek Kolstad, the creator of the John Wick franchise, and Nobody is the end result.

It’s an interesting idea.  In playing Hutch Mansell, the film’s semi-reluctant protagonist, Odenkirk doesn’t want to be another suave, sophisticated action hero in the same vein as Ethan Hunt or Jason Bourne.  As we learn from the title and a humorous question posed in the opening scene, Hutch is a “nobody”.  He’s a quiet, unassuming guy who isn’t much of a conversationalist.  His daily routine is monotonous, his job is dull, and his relationship with his wife (Nielsen) is waning (they haven’t made love in years).  The bottom line – he’s an ordinary person who goes about his life with little fanfare and attention.

The Mansell home is burgled one evening and, despite having a chance to take down the robbers, Hutch doesn’t take it.  It’s a decision he regrets in the coming days.  Then, as if a switch has been flicked on in the back of his head, he walks out the front door and goes in search of the perpetrators.  Not a word is said to his family.

Hutch encounters a group of unrelated thugs harassing a young woman on a city bus and, as part of his “new” self, defends her honour and beats the men into submission.  That’s not the end of it though.  One of the thugs was the brother of a powerful Russian gangster / money launderer (Serebryakov) who is “as bad as they come”.  It’s not long before a myriad of goons come after Hutch but they, just like the audience, are about to learn there’s more to this hero than they first thought.

Nobody is an action flick with style and this is illustrated by the use of music.  Russian director Ilya Naishuller (Hardcore Henry) uses Louis Armstrong’s “What a Wonderful World”, Frank Sinatra’s “My Way”, and Gerry & the Pacemakers’s “You’ll Never Walk Alone”.  These “old school” tunes provide a humorous contrast to the intense, violent fighting sequences.  Having a villain who is a karaoke fan is also a cool, unexpected touch.

It succumbs to a few action clichés in the second half (e.g. incompetent henchmen, over-the-top escapes) and not enough is made of Hutch’s family but Nobody‘s strengths clearly outweigh its weaknesses.  From the intriguing premise, to the creative killings, to the cameo of Christopher Lloyd (Back to the Future), there’s much amusement on offer.  It’s a notch below the John Wick franchise but it’s still a fun, entertaining feature.

You can read my chat with producer Kelly McCormick by clicking here.