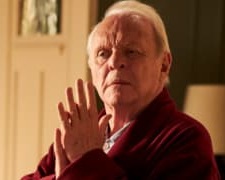 A lot of research money and effort is going into the issue but dementia remains the second leading cause of death of Australians.  There are close to 500,000 people living with dementia in Australia right now and they account for 52% of all residents in aged care facilities.  These statistics are both staggering and depressing.  Almost all Australians, whether it be through themselves, a family member or a friend, will be required to confront this issue at some point in their lives.

There have been some powerful movies about this subject matter (e.g. Still Alice, Away From Her, Iris) but writer-director Florian Zeller tackles it from an unexpected viewpoint – through the eyes of the sufferer.  He wants to disorientate the audience and make them feel like they’re in the middle of a labyrinth and not sure where they’re going.

The way he does so is quite creative.  The Father is set almost entirely within the confines of a spacious London apartment and is centred on a man named Anthony (Hopkins) who is suffering from dementia.  In the opening sequence, his loving daughter (Colman) says she’s moving to Paris and they will need to find a new caregiver.

The next 90 minutes plays out like a not-so-action-packed version of Inception in the sense that you’re not what’s real and what’s not.  Actors change.  Storylines change.  Small details within the apartment change.  The daughter is played by Olivia Colman in one scene and then by Olivia Williams in the next scene.  We, just like the title character, are now part of a confusing world where we can see what’s going on… but we can’t delineate between truth and fiction.

The Father began its life in 2012 as a French play and has since been performed in countries including England, the United States and Australia.  Frank Langella won a Tony Award in 2016 for his leading performance.  In adapting it for the big screen, Zeller has been assisted by Oscar nominated screenwriter Christopher Hampton (Atonement) and a stellar cast headlined by Anthony Hopkins (Silence of the Lambs).

It comes together beautifully.  The apartment feels like a character in itself in that you’re trying to work out what feels different about it from scene-to-scene.  The production design, cinematography and editing allow Zeller to achieve more with the material than what was possible on stage.  In terms of the performances, there’s an endearing warmth to both Hopkins and Colman.  With the wrong actors, this could have come across as a gimmicky exercise but, as demonstrated in the closing moments, you grow to care about them both and realise it’s as much her film as it is his.

As the last of this Academy Award nominees for best picture to be released here in Australia, The Father is one of the year’s best movies.

You can read my chat with writer-director Florian Zeller by clicking here.