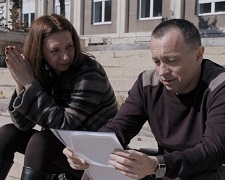 Politics is a curious beast. It is covered thoroughly by the media every day and there’s no shortage of opinions from the public who weigh in on social media or talkback radio.  Yet, despite how relevant it is to our daily lives, its inner machinations are often more secretive than the British Royal Family.  We’re not privy to the arguments, compromises and concessions that take place behind closed doors.  I’m reminded of the lyrics from Lin-Manuel Miranda’s Hamilton - “No one really knows how the game is played... the art of the trade... how the sausage gets made... we just assume that it happens.”

It’s a relevant point because Collective is a rare documentary that offers a glimpse, albeit a fleeting one, about this fascinating world.  In October 2015, a fire tore through a crowded nightclub in Bucharest, Romania and 64 people were killed.  Mass protests followed and the entire government, led by Prime Minister Victor Ponta, resigned.  An interim government was assembled consisting of 21 technocrats with no affiliation to established political parties (itself a fascinating idea).  They would govern for a year until fresh democratic elections could be held.

Director Alexander Nanau focuses his camera on two key individuals.  The first is Câtâlan Tolontan, an investigative journalist at a daily sports newspaper.  At a time when many other journalists were happy to peddle the government’s propaganda, Tolontan wasn’t afraid to dig deeper and ask tough questions.  What he uncovered in the aftermath of the nightclub fire was astounding (and I won’t spoil it).  To borrow the words of his colleague - “The story is so mind blowing, I’m afraid we’ll look crazy.”

The film’s second key subject is Vlad Voiculescu, a 32-year-old economist with no political experience who had been appointed Minister of Health in the temporary government.  Remarkably, Voiculescu allowed Nanau to film the inner workings of his department on the basis that “health belongs to the citizens and it is their basic right to know what’s happening here.”  Through his eyes, we learn the Romanian health system is a hotbed of corruption and almost everyone is in on it.  A few brave whistle blowers agree to appear on camera in the film and their stories are shocking.

Collective is riveting from start to finish.  For those unfamiliar with this story and these people, it’ll be both eye-opening and depressing.  It reminds us of the importance of quality investigative journalism.  It demonstrates how tainted one can become when driven by money above all else.  Most interestingly, it shows how difficult it can be to change “the system” when so many have a vested interest in quietly maintaining the status quo.  The closing scene, where Voiculescu dissects an election result, sums up the film’s essence.

Nominated at the Academy Awards for both best documentary feature and best international feature (just the second film to achieve that honour), Collective is a movie you won’t easily forget.