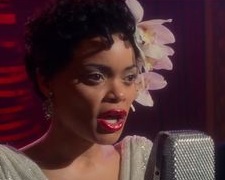 In 1972, singer Diana Ross earned an Academy Award nomination for playing iconic American singer Billie Holiday in her first movie role.  History has repeated with Andra Day.  Almost 50 years after the release of the maligned Lady Sings the Blues, director Lee Daniels (Precious) and writer Suzan-Lori Parks (Native Son) offer a different perspective on Holiday and, despite the film having a few issues, it’s hard not to be impressed by the performance of Day who deftly embodies the title character.

If you’re new to the Billie Holiday tale, she was a gifted African American jazz singer who rose to fame during the Great Depression.  She recorded her first songs as an 18-year-old in 1933 and, based in New York City, she regularly performed at concerts and cabaret shows in front of packed crowds.  Dying in 1959 at the age of just 44, she was posthumously inducted into both the Grammy Hall of Fame and Rock and Roll Hall of Fame.

The United States vs. Billie Holiday portrays its subject as a gifted musician, a powerful civil rights activist, and a troubled human being with questionable taste in men.  It’s not trying to paint her as a saint.  Most notably, it recognises she had both drug and alcohol addictions that had a significant impact on her personal and professional life.  She was imprisoned for a year in 1947 after being found guilty of narcotics possession.

Drawing largely from the Johann Hari’s source material, “Chasing the Scream”, the film also offers the perspective of the Federal Bureau of Narcotics headed by Harry Anslinger (Hedlund).  It paints Anslinger as a racist who uses the “war on drugs” to specifically target African Americans and other minorities.  He enlists an undercover agent (Rhodes) to follow the high-profile Holiday and gather intelligence that could lead to her arrest.

Few would deny Anslinger was a bigot but there’s a clumsiness to the way these scenes play out in the film.  He’s very open about his villainy and, given he served as commissioner for 32 years, you have to believe he was more cunning and calculating than what we see in the movie.  The relationship Holiday shares with the undercover agent is also difficult to buy into (perhaps because it didn’t happen in real life either).

The film is at its best when it focuses solely on Billie Holiday, her talent and her role in representing African American people.  This was all prior to the civil rights movement of the 1950s and 60s.  Holiday wasn’t afraid to stand on stage and sing protest songs like “Strange Fruit” to shine the spotlight on inequality and white suppression.  I enjoyed the confidence and no-bullshit attitude brought to the character by Andra Day.  We see Holliday as a woman not afraid to speak her mind.

The drug/alcoholism stuff is overdone (it feels repetitive in places) but The United States vs. Billie Holiday still offers insight into a person who’s legacy should not be forgotten.

You can read my chat with Oscar nominated star Andra Day by clicking here.