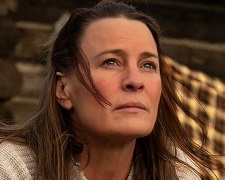 Edee (Wright) is a middle-aged, suburban woman who has purchased a dilapidated, single-room cabin in the Wyoming wilderness.  You won’t find this place on Google Street View and there’s no highway or convenience store nearby.  Wyoming is already the least densely populated state in the contiguous United States and she’s deliberately selected this spot due to its remoteness from civilisation.

There’s a reason behind her unusual change of living.  Edee went through a tragic experience and, as she tells a psychiatrist in the film’s opening scene, she doesn’t want to be around people anymore.  Edee has pushed away those offering support so she, rightly or wrongly, can be “alone with her pain” and grieve in the way she desires.

One could look at Edee and see her actions as selfish and suicidal.  She hasn’t told her family where she’s gone (they must be worried sick) and she’s living in a freezing shack in the middle of nowhere with no car, no mobile phone, a minimal amount of tinned food, and zero skills when it comes to hunting and fishing.  It doesn’t matter what she reads in the handful of self-help books she’s purchased.  In the same vein as Christopher McCandless in Into the Wild, Edee’s is well-intentioned but ill-equipped.

Writers Jesse Chatham and Erin Dignam have structured the film as part drama (which works) and part mystery (which doesn’t work).  They try to build unnecessary intrigue by withholding details of Edee’s heart-breaking past, continually dropping hints via flashbacks and fantasy scenes, and then revealing all at the end.  Perhaps this decision was taken to mirror Edee’s insular nature (she gives up very little) but, as a viewer looking in from the outside, a greater understanding of her fractured psyche from the outset would have made it easier to “buy into” the decisions she makes along the way.

The film finds its feet in the second half through the introduction of Miguel (Bichir), a cowboy-like hunter who befriends Edee and helps out with a few things.  A cynical part of me saw his arrival as an attempt to add dialogue to the movie (there isn’t much when Edee is on her own) but ultimately, I loved the bond developed between these two leading characters.

They remind us that, however much we try to shut ourselves off from the world, there’s no substitute for meaningful human interaction.  We’ve seen this theme driven home in many other movies where two unrelated people come together and improve themselves by helping the other.  It rings true in this case thanks to the subtle performances of Robin Wright (Forrest Gump) and Demián Bichir (A Better Life).  It’s hard not be moved by the finale.

Marking the feature film directorial debut of Wright, Land is a simple but effective tale.