Review: Two of Us 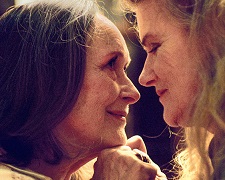 It has a chequered history but the best international feature film category at the Academy Awards still plays a big part in bringing non-English language cinema to the world’s attention.  To be eligible, the feature film must be produced outside of the United States and more than 50% of the dialogue must be non-English.  Perhaps the most controversial rule is that each country may only submit one movie.  This places a heavy burden on those involved with the selection process to ensure they pick the film with the best chance of success.

In France, the process is overseen by the National Cinema Centre and the panel consists of directors, producers, sales agents, and other knowledgeable film folk.  They come up with a shortlist of roughly five movies, meet with the respective filmmakers, and then decide on a “winner”.  Their selection for the most recent Oscars ceremony was Two of Us and while it didn’t make the final list of nominees (a tough ask given 93 countries submitted in 2020), it’s easy to see why it was France’s worthy submission.

Marking the feature film debut of Italian-born director Filippo Meneghetti, Two of Us explores a dynamic that we don’t often see depicted on the big screen – a same-sex relationship between two 60-something-year-old women.  Nina (Sukowa) and Madeleine (Chevallier) have been lovers for roughly 20 years but, worried about how society will perceive their connection, they’ve kept it hidden from everyone.  It’s particularly problematic for Madeleine who is scared of telling the truth to her two grown children (from a former marriage).

So how have they kept it a secret for long?  By becoming neighbours.  They share adjoining residences on the top floor of an apartment building and they freely walk back-and-forth across the corridor when they need to see each other.  If one of Madeleine’s kids decides to stop by, Nina can easily slip back to her place and no one’s the wiser.  It’s an arrangement that’s served them well but, with hopes of moving into their own combined place, Nina has been pressuring an apprehensive Madeleine to finally “come out of the closet” to friends and family.

It’s at the start of the second act when a tragic event tears these two women apart (it’s best I don’t reveal too much).  The tone shifts, other characters enter the mix, and the emotional heart of this story resonates.  Barbara Sukowa and Martine Chevallier are excellent in the lead roles and they will convince audiences of their love for each other.  Muriel Bénazéraf adds a layer of complexity with her scene-stealing performance as a caregiver with issues of her own.

The adage “sex sells” has been around since the 19th century and it’s a major reason why characters in romantic movies (whether they be comedy or drama) tend to be young and good looking.  Meneghetti and co-writer Malysone Bovorasmy wanted to buck that trend and provide a love story that contrasts with “society’s obsession with youth and the perfection of the body.”  It wasn’t easy to secure finance (as it was seen as “non-commercial”) but I’m glad they stuck with their vision and followed this through.